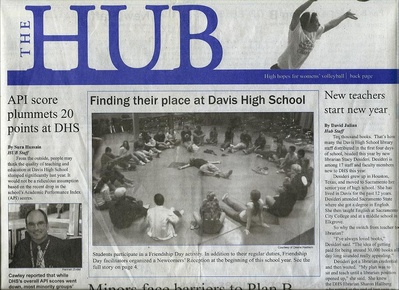 Sample of The HUB (from the September 2006 issue)

The HUB is the official school newspaper for Davis High School. It comes out every month, usually on a Friday. The class is officially called ROP Journalism 2, and is current advised by Mrs. Kelly Wilkerson. The paper covers a plethora of issues, ranging from the hottest local entertainment to high school sports. They print at the Herburger Publications printing presses.

It has been recently recognized nationally as one of the top high school newspapers, winning a few "Best of the High School Press” awards by the National Scholastic Press Association Enterprise story here.

In addition to the monthly print newspaper, The HUB runs a full online site which features articles, pictures, and video not available in print and offered free of charge to the general public. The website has also been the recipient of many awards in recent years.

In the news: On November 18th 2011 the whole world turned to Davis when Officer John Pike pepper sprayed civilians at a peaceful demonstration on the UC Davis campus that was part of the occupy movement. While the event was covered by a variety of professional news sources, credit for much of the original photo and video goes to The HUB. The HUB's video of Chancellor Linda Katehi's speech and interactions with the protesters received over 100,000 views and the paper later received one of the highest awards in high school journalism for their efforts.

Controversy: The Davis Police Department attempted to do an investigation regarding tagging and gang activity. The HUB, which ran the article, "Art or Vandalism," in April 2011 talks about the issues regarding graffiti. However, following proper journalistic fashion, the article masks the identities of those involved in the elicit activities. The Police Department, however, desired to uncover those responsible. As a result, the ACLU is challenged the Davis Police Department for its actions in the investigation. article

Advertising: In order to cover the costs of the journalism program, The HUB and BlueDevlHUB.com both sell ad space starting at less than $100 per month. Companies, organizations, and individuals interested in placing an ad can contact the current business managers at [email protected]