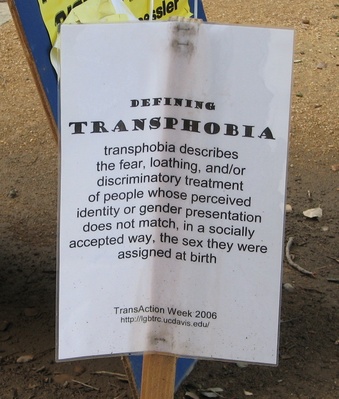 Trans Action Week is held annually in late November as a time of education and awareness around transgender and gender variant issues and experiences. It is organized by the TransAction Committee, under the Lesbian, Gay, Bisexual and Transgender Resource Center. Events vary greatly, from speakers to self defense training, "draw your gender", Trans 101 and academic discussions of community intersections (to name just a few).

The 2010 Trans Action Week was from November 15th to 19th. The schedule was as follows:

Genderpalooza! Join us at the MU to explore your artistic side and learn about transgender issues and activism. Draw your gender! Explore transgender identities and issues with fun activities! MU Patio 11am-1pm co-sponsored by Gender Group

HIV Testing - Free & Anonymous Come into the LGBT Resource center for free anonymous HIV antibody testing on scheduled days, organized by the UC Davis Health Education Program. The test is “rapid”, which means that results only take 20 minutes, and is an oral swab (no blood needed!). The LGBT Resource Center is located on campus at the University House Annex across from Voorhies Hall. Walk-ins are welcome during testing hours. Please come in early to sign-up for a time slot. LGBT Resource Center, University House Annex 6-8pm

"Categorical Difficulties: Trans Subjects and the Politics of Legibility" This academic panel of papers will trace the epistemic violence faced by gender non-conforming people, arising from the narrowly-defined gender categories available to officially identify and classify trans folks. In order to be legible within legal and social systems, gender non-conforming people are forced to narrate themselves through reductive, binary categories. This often comes at the expense of having the ability to define and imagine different ways of organizing gendered or non-gendered identities, histories, and bodies. As a result, for those who fall under the umbrella term transgender, the gaining of political recognition, civil rights, and access to community benefits often comes at the expense of their own ability to define themselves. This panel will investigate these contradictions and offer strategies for navigating the politics of transgender categorization in more complex and socially responsible ways. Hart 3201 3-4pm with the Queer, Feminist, and Transgender Studies Research Cluster

RISE UP! A TransAction Week Discussion Rise Up is a weekly discussion series that is open to everybody and anybody who is interested in talking things out. This is a great way to come and check out the LGBT Resource Center as well as join in on casual discussions that are related to the Queer community. LGBT Resource Center, University House Annex 12-1pm

Trans Resources Panel: Social & Legal Issues Come learn about resources available to trans and gender variant people at UC Davis and in the surrounding community and get questions answered. This panel will feature representatives from Counseling And Psychological Services (CAPS), Lamdba Law, and the Sacramento Transgender Coalition. Voorhies 126 12-1:30pm

Gender Group Meeting A weekly social/support group for anyone who identifies as falling under the trans umbrella (or a non-cisgender identity) or people who are questioning their gender identity. The group is open to all trans* folks of the Davis area community. For more information email: ucd.gender[email protected] 5-6pm

Keynote: Ryka Aoki de la Cruz Ryka Aoki is a writer, performer, and educator who has been honored by the California State Senate for creating Trans/Giving, LA’s only art/performance series dedicated to trans*, genderqueer, and intersex artists. She has also closely worked with the American Association of Hiroshima-Nagasaki A-Bomb Survivors, and two of her compositions were adopted by the group as its “Songs of Peace.” Ryka appears in the recent trans documentaries “Diagnosing Difference” and “Riot Acts” as well as the Anthology Gender Outlaws: The Next Generation (Seal Press).

Ryka has as an MFA in Creative Writing from Cornell University and is the recipient of a University Award from the Academy of American Poets. Her chapbook, Sometimes Too Hot the Eye of Heaven Shines (Incognito Press) won the 2010 Eli Coppola Chapbook Contest. Ryka’s poetry is forthcoming in the 2011 edition of Many Mountains Moving, and Hummingbird Review. She is a professor of English at Santa Monica College.

Trans Resources Panel: Medical Issues Come learn about resources available to trans and gender variant people at UC Davis and in the surrounding community, connect with important providers, and get questions answered. This panel will feature representatives from Student Health Services and Counseling And Psychological Services (CAPS). Voorhies 126 12-1:30pm

TransForming Body Image Traditionally, body image has been discussed in a way that is gender dichotomous and not inclusive of varying expressions of identity. This workshop will explore messages about appearance and gender and how they impact body image and self esteem. Presenters from Counseling And Psychological Services (CAPS) will help participants feel empowered to explore body image in a healthy way that allows for integration of intersecting identities. This workshop assumes a pre-existing level of familiarity with basic issues around gender identity. North Hall 325 11am-12:30pm

Transgender Day of Remembrance Join us to memorialize those who have been killed due to anti-transgender hatred and prejudice, to heal in community and solidarity, and to affirm and celebrate the lives of humans of all gender identities. Central Park Green 5pm with the Unitarian Universalist Church of Davis

Other events in the past, cut for various reasons such as budget cuts, staffing, or time constraints, have included: