DRAGON, which stands for Davis Roleplaying Activities and Gaming Organizational Network, meets Friday nights from ~6-10pm on the top floor of Wellman Hall on Campus. The main meeting room is usually room 226. The core of the group plays Roleplaying games as the main event, but there are many other types of games around. You can expect to find:

In general, people tend to play collectible card games (CCG) and board games in the early hours (5pm to 7pm) and role-playing games in the later hours (7pm till later), but there are always exceptions. Due to a new janitorial crew, Wellman usually closes at 10 or 11pm instead of midnight like it used to. In light of this, it may be wise to move your game start time to 6pm. Players, check with your GM on Facebook or in person to find out what time your game is starting. If you're a new player with questions, check the bottom of this page for an FAQ! :)

Not all players at DRAGON are current UC Davis students; many are alumni or Davis residents. DRAGON is completely free to participate in and does not require signing up (although joining the Facebook page is helpful to keep up-to-date). So, it's totally fine to drop by whenever you're down for a fun game. Bring your friends! 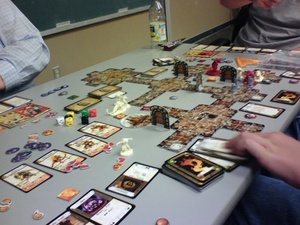 A fun game of "Descent:Into the Dungeon."Among CCGs, Magic: The Gathering is definitely the most commonly played. In addition to this, various players bring a multitude of different board games in every week, including games like Betrayal at House on the Hill, Castle Panic, and The Resistance, among many others. Bringing board games and card games to DRAGON is encouraged, and the members are always excited to try out new games.

Tabletop RPGs are really the core of DRAGON, and most people in the club participate in at least one. By virtue of pervasiveness, Dungeons and Dragons is the most common and most popular game to be played at DRAGON. But other Roleplaying Games have been played there as well, including Vampire: The Masquerade, BASH! Superheroes, FATE: Core, and Dread. There is also a "home-brewing" scene where players will bring in their custom homemade games and ask members of DRAGON to help test them.

Intended to help inexperienced or curious players understand how roleplaying games work, DRAGON holds a "New Member's Night" every year. Usually in late September or early October, no experience is necessary to attend. The event is usually based around "One-Shots", one-session games that are designed to be New-Player-Friendly and engaging. DRAGON always accepts visitors and new members all year.

DRAGON has participated in other events in the past, such as the Gamer's Gift Charity Event in April 2017. They also advertise to new members by posting flyers and tabling by the MU or at campus events like the annual Involvement Fair and Picnic Day. If you're interested in tabling or lending your artistic talent to make some great flyers, contact the officers!

DRAGON has a cadre of active officers who make themselves available for outreach and any questions new players might have. In addition to maintaining the Facebook page, they organize events and reserve rooms for DRAGON. In quotes are their informal designations, and in parenthesis are their formal titles.

Most games alternate weeks, with a session held either every "A" week or every "B" week. This is done to mitigate the time commitment of most games and ensure that there is a large variety of games going on at any given time.

Despite this list as it currently exists, people are starting new games at DRAGON all the time, and most games are willing to accept additional players. 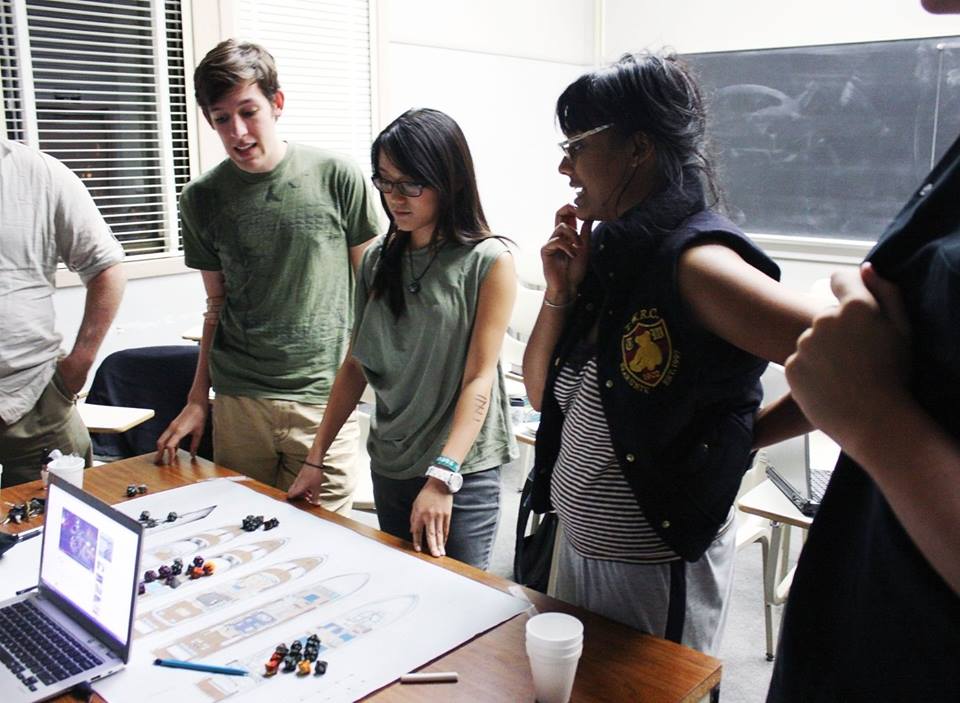 Players on a boat, deciding their next action..

"Week O" (rare) is for off-rotation games — people tend to play board games, one-shots, or simply recruit more players into their games.

"Week PD" stands for PseudoDragon -- a day when campus is closed and regular DRAGON cannot be held in Wellman. When this happens, the group moves to Original Steve's Pizza for an informal, unofficial gathering. Not all games run during PseudoDragon. Check the Facebook and ask your GM for details.

If campus is still open but Wellman Hall is unavailable for whatever reason, DRAGON will often meet at Olson Hall instead. Check the Official Facebook page for details.

In addition to the above list, DRAGON also maintains a "Player Registry"  and a "Games Registry" hosted on Google Docs, which are both public and editable to help players and Game Masters find new games. 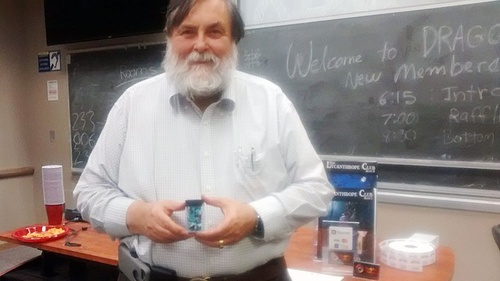 Joe "The Pizza Guy" Senecal: A long-standing member of DRAGON 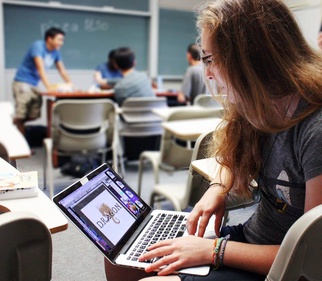 The club has been running longer than most student members have been alive and has changed names several times.

It started as the Davis Gaming Club in 1992, then changed to D.R.A.G.O.N. (Davis Recreation And Gaming Organizational Network) in 1993 and settled into a comfortable niche in Wellman Hall on Friday nights in early 1994. This gaming club has continued to this very day . Many years ago the officers of DRAGON, Davis Anime Club, and the English Country Dancers had some overlap.

Who is allowed to join DRAGON?

Anyone! You do not have to be a current UC Davis student to join DRAGON. Many of our members are UC Davis alumni or are just people from the surrounding area who love playing games. If you are younger than college age or if you are a parent who has a kid interested in our club, please message the officers.

I've never played a roleplaying game before, but I think it would be fun to try. Can I sit in on a game and watch?

I get this question a lot. My answer is, just make a character and play! The game is WAY more fun when you play it yourself, even if -- especially if? -- you have no idea what you're doing. But if you really really want to sit in the corner and watch, there's no harm in asking a GM (Game Master).

I want to join a game. How do I do that?

If you want to play a board game or a CCG such as Magic: The Gathering, just show up to the main room (usually 226) around 5pm. Members bring board games, and some even bring extra Magic decks. Of course, feel free to bring your own.

If you are a new player looking for a roleplaying game, you can look at the "Games Registry". However, I think you should still show up to the main room around 6pm and check the board or ask around to find out which games have openings; the Registry, while helpful, is not always completely up-to-date.

I don't have dice or anything. Can I still play?

Of course! If you're a new or inexperienced player, it's a great idea to show up to DRAGON a bit early and ask for help. Players usually have blank character sheets available (or, print out the sheets for the game you know you want to play in advance) and will help you fill them in. We usually have digital and hard copies of game manuals floating around. Players are also willing to share their dice if you don't have any. Basically, you can come with nothing and be fine. Oh, maybe bring a pencil though... for some reason there are never enough pencils... also snacks.

I played in a game but I didn't really like it. What do I do?

If you realize that you don't like roleplaying for whatever reason, there is zero obligation to keep playing. People drop in and out of games all the time, so don't feel guilty if you want to stop playing. However, I recommend trying a different game. Every GM has their own play style; some emphasize combat or strategy while others love roleplaying scenarios, and some are serious and dramatic while others are sarcastic and silly (that's me). It's important for a roleplaying group to mesh well for maximum fun to be had, and not everyone meshes! So be patient and let yourself find the best group for you. Remember, you can always bring in friends!

Can I become a GM?

Yes! DRAGON loves new GMs. We have a lot of players and like to have enough games running to accommodate them. If you want to start a new game -- either pre-made or homemade -- just go to the "Games Registry" and post your game info, then post on the Facebook page to let people know a new game is starting. You can invite friends or contact people on the "Player Registry" as well.

I want to be a GM, but I've never done it before. How can I learn to GM?

I recommend reading the rules of the game you want to run first. You don't need to know every single detail -- for many roleplaying games, there are too many rules for any normal person to ever memorize -- but how the game is generally played. Maybe play in a game a few times under an experienced GM to get a feel for it. Then, consider running a simple pre-made one-shot. You'll make mistakes, but that's okay! You'll get much more comfortable with practice.

I want to be a GM, but I can't commit to a weekly or bi-weekly game. Can I still GM occasionally?

Run one-shots! If you're in the mood to GM, just post the name and type of game you're going to run, plus your start time, on the Facebook page. There are usually a few people floating around who are down for a one-shot.

I want to play, but I can't commit to a weekly or bi-weekly game. Can I still play occasionally?

Yes! I recommend looking for people running one-shots. Or, join an existing game for one session; GMs are often fine with players dropping in on a game, but make sure to ask :). Being able to commit bi-weekly (to an A week or B week game) is preferable to keep up with the story and really feel like a part of the group, but of course not everyone can do that.

I want to join DRAGON, but I'm busy Friday nights. What do I do?

Unfortunately, DRAGON is only held on Fridays. But we aren't the only people who play fun games! Consider starting a game with your friends, or join an online game (ex. on the website Roll20). There are also game stores downtown that provide game space (ex. Davis Cards and Games).

Does DRAGON have a LARP group?

There is a LARP group that meets every other week in Wellman, and many of the members are also in DRAGON. It's not really an official part of DRAGON though. They are rather elusive, but coming to DRAGON is a good way to find them ;)  They are currently running a Changeling: the Dreaming homebrew for the past year.

This FAQ is too extensive. Why is it so long?

Because the author -- illustrious former President Linda -- likes to be thorough.

I have a question that's not on here. Who can I contact?

If you have a specific question, you can always contact one of the officers, who are listed above in their own special section. If you have a general question to ask the club, you can post on the Facebook page to hear back from members.