A campus is a site with at least several buildings used by one organization. The most common usage in town refers to the UC Davis campus, which is what this entry covers. There are many other campuses in town which are linked from the entry on schools. 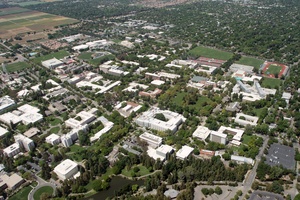 Aerial view of central campus from the Southeast, taken by Andrew Leonard 4-29-07

Campus is where UC Davis sits, for the most part. While the University owns a lot of land outside of Campus, Campus is really where the sitting around academics happen. In addition to core campus there are also South Campus and West Campus which are defined by being south of I-80 and west of Highway 113 respectively. All together, campus covers 5,300 acres of land, making it the largest UC campus.

Once admitted to one of the Colleges or hired by the university you'll want to learn your way around so that you can find the various buildings you need to get to. Chances are that there will be one department that you will be most closely associated. You may also need to know the streets. 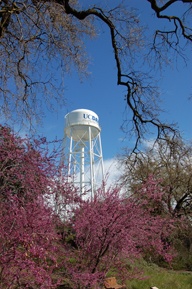 Most students will begin their college experience at the Dorms. Along their educational journey they will have lectures in the various Campus Lecture Halls and classrooms. After class they can join organizations and get involved. Some students may be here on scholarships others may be working their way through. Some will take Summer Sessions. Toward the end of their stay they may be considering Best Classes To Take Your Last Quarter...or so I've heard, graduation, and life after UC Davis.

Grad students will be a part of a Graduate Groups and may be attending one of the Professional Schools.

Faculty and staff will find resources with their department and through such services as Classroom Technology Services and other organizations.

There are a lot of beautiful things to see as you discover new places. If you can't get to the MU or the Silo for lunch you'll want to know where the nearest vending machines are. Also of note though less important in this cellular age are the location of campus phones.

Events throughout the year include Picnic Day and the Whole Earth Festival. Various organizations put on events as well.

The Campus is expanding and is undergoing nearly constant construction. If you decide to drive to Campus, your car is under the jurisdiction of TAPS — so be careful where you park! If you're smart you'll use an alternative form of transportation such as a bike.

Many people exist on campus so much that Sleeping On Campus becomes a good option. With that in mind, we all want to know where the UCD Bathrooms are.

2007-08-08 11:14:03   UC Davis is often cited as being a "research campus". Does this mean something in particular within the UC system (fund allocation), or is it a general description? —JabberWokky

2007-08-09 11:06:03   Bingo. That's what I was looking for. Thanks to all who dropped the right terms and links. I figured it meant something specific (rather than just descriptive) since it is touted in various press releases. Hurm... now, where to place this on the wiki (as relates specifically to "research campus status", as the tier system is already documented)...