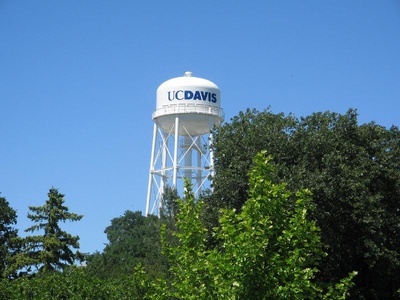 One of the trademark UC Davis Water Towers.

UC Davis, also referred to as "UCD," "The College", "Campus", or "University of California, Davis" (on official documents), is the institute of higher education that impacts most everything in our bucolic town. UC Davis is virtually a city within a city, unbound by most City of Davis rules — in fact, campus provides its own infrastructure including water supply, streets, sanitation, airport, police force and fire department. In fact, it is the largest employer in Yolo County, by a wide margin, employing 11,704 "full-time equivalents" with an additional 1,289 season FTEs (2011 Sacramento Business Journal figures). But the university is not immune to its impact on the city around it, so great effort is made to reach agreement with city leaders and the local population to ensure a relatively comfortable town-gown relationship. Both city leaders and university officials work together as often as they fight to work in the best interests of both citizens, students, and campus. To find out where to go and what to do at UCD, see our Campus page. 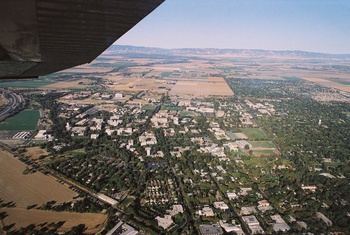 UC Davis has four colleges and six professional schools. There are 103 undergraduate majors and 80 graduate groups with these figures fluctuating annually. Each program of study is managed by a university department. The university is run by UCD administrative officers and hardworking university staff. Classes are frequently taught by tenured professors, which is unusual in research universities — only a few courses are taught by lecturers or graduate students. And when you're done with school, check out the UCD Commencement page.

As recently as 1996, UC Davis was ranked third amongst UC campuses in US News and World Report's annual ranking of universities. Since then, UC San Diego has taken over the enviable position of "third most prestigious UC." In fact, schools like UC Irvine and UC Santa Barbara have ranked higher than UC Davis in recent years. Though many believe the UC Regents have a plan to make Davis the next flagship campus like Berkeley or UCLA, there is no documented evidence of this — but perhaps that is what the 2020 Initiative is aiming for. What is certain is that a planned expansion of the undergraduate student body resulted in a less rigorous admissions policy for much of the 2000s. In recent years, however, Davis has become increasingly selective and has risen in the rankings, with the 2008 US News and World Report ranking UC Davis 4th among the UC's. 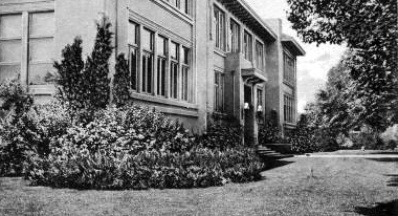 The Northern Branch of the College of Agriculture, circa 1930.

The early history of UC Davis can be read in the University Farm entry. Other high points can be found at the UC Davis timeline. 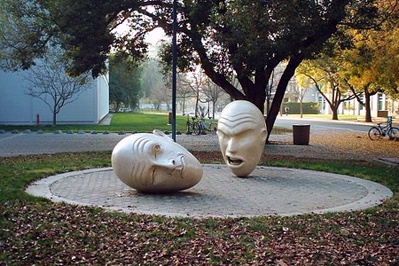 Seven Egghead sculptures can be found around campus.

UC Davis is a land grant university, and retains a lot of land for agricultural and environmental study. UC Davis' campus covers 5300 acres. For those of you in the science or engineering fields, that's 21.5 km2 (8.3 square miles or 2150 hectares). Most of campus west of Highway 113 (termed West Campus) consists of open fields used for agricultural, biological, and environmental studies; West Campus also includes the Primate Center and university airport. There is also a chunk of land to the south in Solano County, South Campus, that holds the California Raptor Center, UCD's sewer plant, and a variety of animal and agricultural research facilities.

Most of the action at UC Davis takes place within "central campus", east of the Highway 113. Here you'll find most campus buildings, laboratories, and administrative offices.

Most of campus is extremely flat, which makes it easy to ride bicycles along our many bike paths. Riding a bike or taking a stroll through the beautiful Arboretum is a excellent tour for visitors.

UC Davis has Four Undergraduate Colleges and Five Graduate Schools in which students can earn degrees. 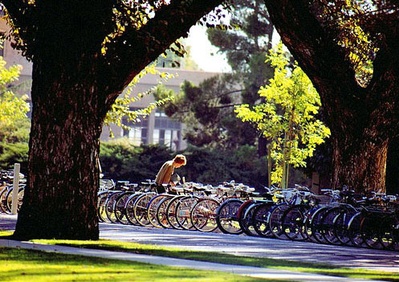 Bicycles parked in front of Shields Library, circa 1965.

More factoids are available at http://facts.ucdavis.edu/

There are two freeway exits for UC Davis:

Driving from Sacramento International Airport, take Interstate 5 northbound until you reach Highway 113 in Woodland. To get on the 113 southbound, you'll have to exit on Main Street, take a left, drive forward about 1/2 mile, and take another left onto the freeway. Take Highway 113 south until you reach Hutchison Drive.

Visitors and prospective students can take a free campus tour. 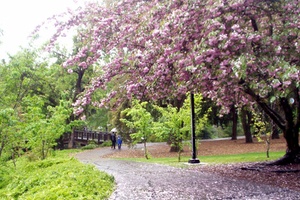 UC Davis in the Spring. 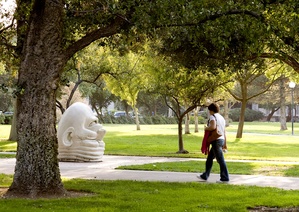 UC Davis in the Fall 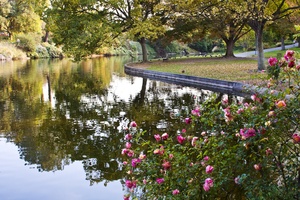 The Arboretum is a beautiful place to walk or relax in.

See the rest of the wiki — good places to start off include Campus, Student Organizations and UC Davis Academics. If you're considering becoming a freshman, look into a campus tour.