Highway 113 south of Woodland, just before the overpass that crosses the tracks 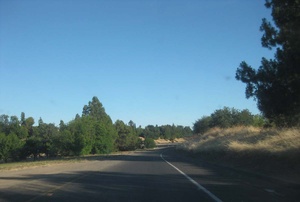 The 113 onramp from Covell Boulevard in Davis.

California State Route 113, or Highway 113, is also officially known as the Vic Fazio Highway. Fazio was the local congressman who helped deliver the money to improve and realign 113. Highway 113 connects Davis to Woodland and runs directly North/South. It also marks the beginning of West Davis. Davis Exits include Hutchison Drive, Russell and Covell. It intersects with Interstate 80 near the southwest corner of the UC Davis campus. As you travel north from Davis to Woodland you can see the Rice Grower's Association on your right about the halfway point. Although there are few speed limit signs on 113 between Davis and Woodland and everyone tends to drive around 85-90 MPH on the road, be warned the ACTUAL speed limit is 65. Meanwhile, Davis drivers often use 113 as a surface street, driving no more than 50 mph between Hutchison and Covell.

The shape of the highway sign for California state highways, such as 113, is based on a miner's spade. (source) 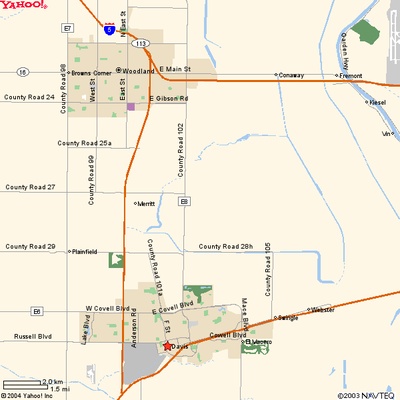 Many of the oaks and buckeyes planted along the highway between West Covell Boulevard and Willow Slough were planted and are maintained by Tree Davis volunteers. The Woodland Tree Foundation is responsible for much of the planting and maintenance from County Road 29 through Woodland.

Highway 113 was widened in Davis in the late 1960s. Construction was delayed by several years by a local official who insisted that the entire highway be built in a trench to so as not to divide the then-developing West Davis part of the city. Davis is forever indebted to this individual for making 113 nearly invisible to the city, and allowing pedestrians and bicyclists to cross it without having to climb long hills or go through tunnels, as is the case with I-80. For several decades, 113 was only a highway in Davis, and narrowed to two lanes as East St. in Woodland. Later Highway 113 was extended to the north around downtown Woodland and it is now a complete freeway connection from I-80 in Davis and I-5 in Woodland. Davis is fortunate that the Highway 113-I-5 interchange in Woodland is incomplete and does not include freeway ramps from northbound 113 to southbound I-5 and vice versa. With these ramps, 113 would serve as a western beltway to Sacramento and carry much more regional traffic from the northern suburbs of Sacramento to the San Francisco Bay Area.

South: After Merging with I-80 West, it heads due south out of Dixon until it ends at the junction with Highway 12 outside of Rio Vista.

North: After Joining with I-5 in Woodland It exits at East Street and heads north through Knights Landing and joins up with Highway 99 just south of Yuba City.