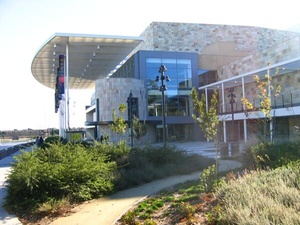 Approaching the Mondavi Center from Campus.

The Mondavi Center for the Arts opened in 2002 as UC Davis's beautiful new home for its University Symphony Orchestra and other cultural events. The center is named after the late vintner, Robert Mondavi, and his wife Margrit Mondavi, who donated $10 million toward the building cost. The project was estimated to cost $60.9 million. Sandstone tile covers the outside of the building. 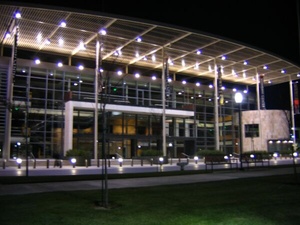 And as seen from the front. 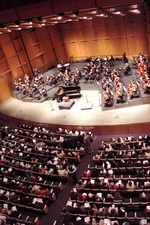 The Mondavi Center was built on the site of Lot 1A, which was reported to have been built over a former Native American burial ground for the Patwin tribe. See the Parking Lot 1A entry for more information. In Summer of 2011, the building underwent repairs to fix waterproofing under the sandstone tiles. Many of the tiles will be replaced and the repairs will last until December 2011.

Every first-year undergraduate and graduate UC Davis student, as well as all first-year UC Davis transfer students are entitled to one free ticket to any performance on the current calendar. Details can be found on their website but this includes everything from ballet, dance, and theater companies; retrospective films; live music performances by artists like Elvis Costello, Yo-Yo Ma, Itzhak Perlman, Buddy Guy, Wynton Marsalis, and the New York Philharmonic; and spoken word events featuring guests such as Sarah Silverman, Oliver Stone, Patty Smith, David Sedaris, Ira Glass (NPR's This American Life host) and Arianna Huffington (founder of The Huffington Post).

Many shows have tickets as low as $25. In addition, all students (no matter which school you attend) get a 50% discount. Some find the performances to still be a bit pricey, but this is still a good deal for acts that might otherwise be completely unaffordable. Given the headliners and famous speakers that the Center draws this can be a good place for celebrity sightings.

Exclusive ticket promotions and giveaways are available throughout the year and the only way to find out about these is to sign up on the Mondavi Center Facebook, Instagram or Twitter page. There are also a number of free shows at the Center sponsored by various campus departments. Please check the Mondavi Center event schedule for a list.

Jackson Hall is the main event room in the Mondavi Center. It has four tiers and areas of seating and can hold up to 1800 people.

The hall is named after Davis resident Barbara K. Jackson and her late husband W. Turrentine "Turpie" Jackson, who was a UCD history professor. Jackson made her $5 million gift in March of 2001, a critical time when the fund drive for the (then unnamed) center appeared to be in danger of faltering. If her gift had not been eclipsed soon after by the Mondavis' donation, we might very well have the UC Davis Jackson Center instead.

Barbara Jackson has her own box seat in the hall, shown at the arrow in the picture above. Even ushers rarely see her, since she usually comes through the performers' entrance and walks up the fire exit stairs just before the curtain.

Jackson Hall has exceptionally clean and precise acoustics. The hall changes between amplified and unamplified setups. For amplifed shows, such as jazz, folk, blues and spoken word, a system of drapes and banners is deployed, dampening the space. The hall also features the world class Meyer Sound M'elodie line array. The drapes, banners and speakers are retracted and replaced with a 26 ton acoustical enclosure for classical events, creating an acoustically "live" space, where you can hear a pin drop.

The adjacent Vanderhoef Studio Theatre is for smaller, more intimate performances like small jazz bands, string quartets and piano recitals. The seating can be rearranged to hold up to 250 people, has a club atmosphere and a refreshment bar. The three arrangements are:

The theatre was named in honor of Larry and Rosalie Vanderhoef in recognition of their efforts to establish the Mondavi Center.

*There is no longer an ATM in the lobby.

The main parking structure is located on Hilgard Lane, just south of the Mondavi Center building.

Parking for the Mondavi Center is available for pre-purchase as of June 11, 2021. Prepaid event parking can be purchased through ParkMobile.

You can avoid the parking fee altogether by walking, biking or using shuttles which drop-off directly in front of the Center's doors.

Were bodies exhumed when they were constructing the mondavi? Daubert

I was really disappointed today when I went to the Mondavi Center buy advanced tickets for a performance tomorrow, just to find out that they now only sell those through ticketsmaster. Ticketsmaster, in turn, charges “handling” fees that make it unaffordable for my family to attend these events. On occasion, when I was waiting for a performance in the past, I’ve overheard people from Sacramento saying that they would drive all the way to Davis to purchase an advanced ticket, to avoid ticketmasters’ absurd handling fees. And I, who live in Davis, have always purchased my tickets there; it’s just a bike ride away for me. I’m sure the Mondavi Center will lose customers and that performances are now a step further away from people like me in the Sacramento area. —UpsetCustommer