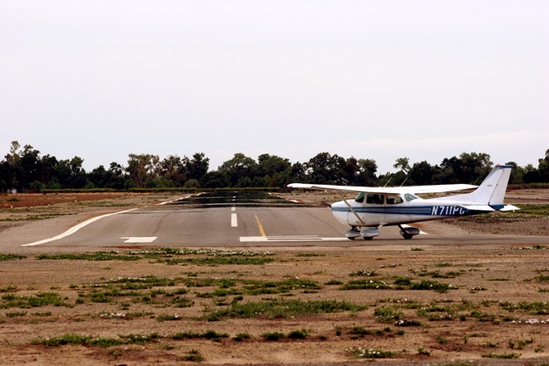 One of CAFF's aircraft about to take off from what was formerly called runway 16, renamed in 2009 to runway 17.

The University Airport, located on the UC Davis Campus, opened in 1946 and was acquired by UC Davis in 1950. It is now under regulation of TAPS. It is the home of Cal Aggie Flying Farmers and Davis Air Repair. The Cal Aggie Flying Farmers are the primary FBO (Fixed Base Operator) on the airport and they offer rental of lightweight airplanes, and low cost flight instruction. Davis Air Repair and Utility Aircraft Corp. (http://www.utilityaircraft.com/aboutus.html; 530-756-1202) offers repair and maintenance of aircraft and aircraft sales.

The airport is a general aviation airport and, as such, it works as a place for the UC's research fields and agricultural endeavors as well as a convenient place for UC employee transportation. It also has a working AWOS weather station which can be heard by phoning 530-754-6839, or viewed online. Cal Aggie Flying farmers also has a live video stream of the ramp, which appears to be taken on an infrared camera.

Because the earth's magnetic field is always moving, the runway directions at University Airport changed in April 2009. The new runways are Runway 17 and Runway 35 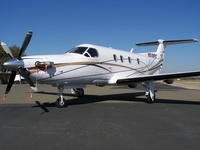 Another view of Runway 17 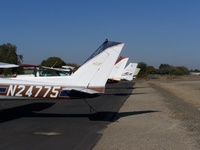 At night, one can walk down Olive Tree Lane (off Russell) to a road that is just behind the runway. You can watch planes land over your head there - it's a thrill.

2005-06-08 19:54:00   I've gone out to the north end of the runway on a limited number of occasions to watch the planes land and take off. One of the days I went there, it was slow, and I only saw two taking off. The other day I went, there was no air traffic. You can park by the bee center and walk right out onto a closed section of road between a field and the dirt end of the runway field. I actually took my camera out there to take pictures, and nothing happened. If they question me, I'll just show them my business card.... The above photos were taken by me.—AndrewLeonard

2005-09-27 19:43:20   I don't know if they still do this, but a few years back they used to take students in EAE 129 (Stability & Control) up in 4-seater Cessnas to let them see what pitch, yaw, and roll were. Students went in groups of three students went up at a time and whoever sat in front with the pilot usually got to try their hand at flying. —TracyPerkins

2006-02-19 22:41:48   I'd be surprised if anyone had objections to someone watching airplanes land or taking pictures. In fact, if you want a ride, you could probably just walk up to someone preflighting a plane and say, "Can I come along?" I fly out there about once a month and I'm always happy to have passengers come along for the ride. —ChrisMoore

2006-03-17 15:51:19   I fly out there and spend a lot of time messing around in one of the hangars at the south end of the airport. I think it's extremely cool that you guys are interested enough to come out and stand by the runway and watch people land. I'm sure nearly all of the pilots feel this way when they see people taking pics or whatever. I practically grew up at that airport and it would be a shame to see it gone, so the more people that come out to enjoy it, the better. The Cal Aggie Flying Farmers offers reasonably cheap demo rides if you want to go flying. —SteveDold

2006-08-31 14:53:31   So, as of now, I have plans to get my license there in the spring. Expensive? Yes. Always been a dream of mine? Hell yes! Good place to learn. I've put in about 20-30 hours at the controls of a taildragger this summer just because of the nature of my job. I hear the trainers aren't as fun, but hey, once I'm licensed you can rent/get qualified for much more interesting aircraft! —AndrewLeonard

2006-11-25 15:12:16   The cops (UCD Police) have every right to "hassle" you at the airport because UCD owns the airport. Anybody can watch the airplanes without any hassling, or even wander around some and look at the ones parked on the tarmac, though post 9/11 you might get asked what you're doing. Want a ride in a small plane? Ask any pilot you see, or contact me.—RalphFinch

2006-11-27 01:14:08   at least once a month i ride my bike to the airport with my camera and some food and i just sit on next to the tarmac for hours taking pictures and watching planes take-off and land. I got to go up a an Alon aircoupe at the Young Eagles day. I hope there is another one of those! —AndersYoung

2008-12-18 09:50:46   I am looking to fly into Davis this weekend and looking for transporation to get around town. Can one rent a Bike at the airport? Any other recommendations? Will be there for only 3 hours, so want to avoid renting a car for a day if possible. —VijayR

2010-08-10 11:24:18   For the past 3 weeks there has been the same plane buzzing west Davis every morning at 7 am. Very unpleasant for those of us who like to open our windows at night. Besides being completely rude, I wonder what are the legalities involved here. It is an obvious case of noise pollution. Does anyone know who I can call? —JonFenske

2011-07-01 13:16:25   I saw a note from Jennifer Cook on my wiki site - I don't check it very often. Thanks for the note. No problem at all with noise since last Summer. I think there was just one very, very rude pilot who enjoyed buzzing neighborhoods and waking people up. I know our neighbors were mad about it too. What made it hard for us is it also woke up our young children. Anyway, it was a one-time (couple of weeks) problem, and all is well now. Thanks! —JonFenske

2016-03-30 15:35:15   The building near the hanger has been vandalized and broken into. It was an old fire reporting station, where they keep old records for the Davis fire-department among other information on work related data, and emergencies throughout Davis. I'm surprised the City of Davis, has not cleaned up this building, or maintained it in anyway, as they left the building primarily to rot. I wish all the maintenance vehicles that blow down Hopkins road on a daily basis, would use there resources to clean this building up. It's a very nice, building in actuality. —timothytj1

2016-09-25 22:54:47   i think Norteños left graffiti on this building. And the one at the reproductive center. Came back and the fire depo had been stripped clean. There's still broken glass, no doors, no windows, etc. F- davis for not doing anything about it and the repo biology trailers, near road 98. Disgusting, at least close them off. Also Some fools, hit golf balls threw the windows on hopkins. Disrespectful Other than that, that's davis for you. —elisquidfoot

2016-11-09 06:22:52   Hopkins road is one of the most poorly kept street I think I've seen. Various buildings have been extremely vandalized including the old fire station, and the reproductive center, as well as some of the bio lab trailers. I never had classes here, but remember them being useable growing up. Now they are broken and half boarded up. When is UCD going to take care, of their facilities. With all the maintanence vehicles, and UCD grounds workers, you'd think, they'd repair broken property that they still have control of. Is this a permit issue? And when can we consider, some repairs on this for over all safety. Or should concerned citizens call 1-800-Kent? —macosx009