If you want to learn to fly, and you live in Davis, the Cal Aggie Flying Farmers are your best bet. They're located at the airport, and as expensive as they may seem, their prices are better than most other flight schools/clubs I've seen. It costs about $30-$40 less per hour to fly with an instructor here than in Santa Barbara. 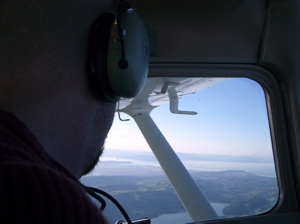 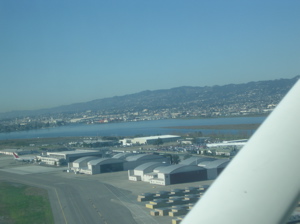 Two shots my wife took flying back to Davis after I picked her up at Oakland Intl. The first is crossing over the bay near Concord, and the second is right after takeoff from Oakland.

I'll add more details when I have time, but here is some information for those interested in getting a pilot's license (NOTE: Unless otherwise noted, everything on this page is specific to fixed wing powered aircraft. I don't have any real experience with gliders or rotor craft).

There are several different types/levels of pilot's licenses, and each level will give you different flying privileges.

This is the major hurdle for most people. Here are basic cost (and hour where known) numbers that you can expect