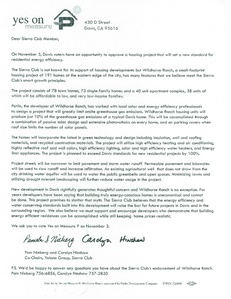 The Sierra Club is a national organization founded by John Muir in 1892. It is dedicated to environmental causes and outdoor activities. The club offers many hikes and other outdoor activities which are led by volunteers.

The local chapter is the Mother Lode Chapter, based in Sacramento. Within this chapter is the Yolano group, serving Sierra Club members living in Yolo county (Davis, Winters, Woodland), part of Solano county (Dixon, Rio Vista) and a small part of Colusa county.

The Yolano Group is joining forces with the Lake Group and the Napa Group in order support Tuleyome's effort to create a National Conservation Area (NCA) in the Blue Ridge Berryessa Region. The exact size and area of the proposed NCA are yet to be determined, but could be as large as 800,000 acres, including Cedar Roughs and Cache Creek Wilderness Areas. It may reach north to the Snow Mountain Wilderness. One hope is that designating this area as an NCA, giving the area a formal name, will make Congress acknowledge the local and national importance of this region. The goals are to:

The Blue Ridge Berryessa National Conservation Area Campaign is looking for donations and volunteers. Also, on January 19th, 2008, the Lake Group is hosting a public meeting at the Brick Hall in Lower Lake to talk about the biological diversity of the Blue Ridge Berryessa region (with a keynote speech by UC Davis biologist Dr. Susan Harrison), as well as to discuss the NCA proposal.