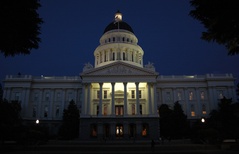 Sacramento is California's state capital, and the closest major city to Davis, located just 15 miles (24 km) to the east, and a stone's throw across the Sacramento River from West Sacramento. It's in Sacramento County. The city was named by Spanish explorers for the Roman Catholic Sacrament of Holy Communion. Sacramento began in 1839 as New Helvetia, a colony founded by Swiss immigrant John Sutter. In 1848, gold was discovered in nearby Coloma, precipitating the California Gold Rush; wealth generated from mined gold helped Sacramento to prosper and grow in its early days. In 1850, Sacramento became the first incorporated city in California; and four years later it was made the permanent capital of the state.

Sacramento suffers many nicknames, including Sac-Town, Sac-a-cement-o, Sack-a-tomatoes, Sack Toe, Excremento, Sock Town, Suckramento, Suck Pimento, Nut-Sacramento, The Big Tomato, and The River City. Despite lying in the shadow of more populous, more elegant San Francisco, Sacramento is an interesting metropolis in and of itself, and offers many of its own attractions.

A 2016 study ranked Sacramento as the tenth most diverse city in the United States; as of 2015, the racial breakdown of the city was estimated at 19% Asian, 14% black, 28% Hispanic, and 34% non-Hispanic white. Many ethnically diverse products and services can be found in Sacramento that are either far more expensive in Davis or simply unavailable.

Geographically, the city anchors the greater Sacramento region, which includes the counties of Sacramento , Placer, El Dorado, Sutter, Yolo and Yuba. The city also provides a meeting point for the Sacramento and American Rivers, with the former defining the city's western periphery; these and other major rivers drain into the Sacramento Valley. Sacramento is located at the nexus of two major Interstate highways: I-5 and I-80, and is served by several other important freeways, such as Highway 50 and Business 80. Most of the city's suburbs lie to the east, along the corridors of I-80 and Highway 50, while Elk Grove, the biggest suburb, abuts the city to the south. UC Davis, in Davis, is a state land grant college and the UC campus in closest proximity to our state capital; because of Davis' closeness it is sometimes considered a suburb of Sacramento, but as a university town it is really separate from the Sacramento metropolitan area. A significant percentage of its student body hails from the Sacramento region, with 10% claiming Sacramento and 4% claiming Yolo as their home counties (source). UC Davis has a Sacramento campus a short distance south-east of downtown which is home to the UC Davis Medical Center.

Sacramento is a large, sprawling city, although the Downtown is compact, clean and handsome, and is easy to reach and navigate; it is punctuated by the beautiful State Capitol Building, which was built in 1874 in the Classical Revival style.

For entertainment-starved college students, Sacramento is seen as a nearby watering hole, with many excellent restaurants and bars and nightclubs in abundance. It also provides a wealth of diversity not found within either the City of Davis or UCD campus.

Sacramento also provides places of worship for those who do not adhere to major European religions.

Once there, these bike maps might make getting around a little easier.

Like most cities, Sacramento has residential and business areas commonly referred to by locals and which share features such as architectural style, business styles, etc. Especially for those visiting from Davis, it can be helpful to have a sense of geographical boundaries for those typically referenced within this wiki.

Sacramento is a growing area for both professional and amateur theatre; some of the better known theaters are listed here.

Sacramento has a very exciting music scene that is still underrated. Many bands left the Bay Area during the 90's as rent went through the roof, and cheap recording studios closed down to make way for more apartments. In Sacramento up-and-coming bands can find plenty of venues, cheap recordings studios, and plenty of artists.

Sacramento has a diverse gay community anchored by the Lambda Center.

If you want to attend any late-night events, you'll have to stay overnight since there aren't any buses which run late. :(