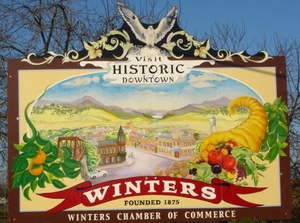 Winters, CA is a smallish town located 11.5 miles west of Davis. Like Davis, it is located in Yolo County. The most direct (and scenic!) route from Davis to Winters is via Russell Blvd., which runs through West Davis and all the way out to Winters (Russell eventually becomes part of the historical Lincoln Highway).

Founded in 1875, Winters served as the agricultural and rail hub for much of the western Sacramento Valley. Bounded by Lake Berryessa to the west and Interstate 505 to the east, Winters is now mostly a bedroom community for the nearby cities of Davis, Fairfield, Vacaville and Sacramento. According to this (pdf) New Employee Orientation guide from UC Davis, "1 in 3 employed residents in Winters Davis works at UCD."

This celebration combines the Harvest Festival and the Farmer's Market. It also commemorates the earthquake of 1892. Beginning in 1991, the festival has been held the third Friday each August with festivities for all ages. More information can be found on the Winters Chamber of Commerce site.

This annual Winters' event began in 1933 and is carried on with pride to this day. The event is held the last Saturday of April each year. The day begins with a parade featuring floats made by students, horseback riders, musicians, cars and other displays of youthful fun. There are also activities, food and a multitude of crafts at City Park. More information can also be found on the Winters Youth Day site.

In addition to being the gateway to Lake Berryessa and all the recreational activities therein, Winters also plays host to a number of quite unique restaurants and entertainment options.

Beginning at Russell Boulevard and Hwy 113, head west (towards the hills) and follow the bike path to its end (about 5 miles out). Turn left on County Road 95a which will take you across the famous Stevenson Bridge. After crossing the bridge, make a right turn onto Putah Creek Road (you're about 6.5 miles out here). Follow Putah Creek Road all the way to Winters. You will know you're almost in Winters when the road appears to dead-end into another road. At this intersection, you'll see an old railroad bridge that's been converted into a pedestrian bridge and an ugly concrete bridge just to the left of it. Just go right over either bridge, and you're in Winters. (Adapted from from Bicycle Rides)

There is a single bus route which serves the city. Take the Yolobus #220.

The Winters Express first issue came off the press in February of 1884. The Express is published weekly. http://wintersexpress.com/

Several well known artists from the late 60s and 70s lived here, and there is a thriving art community in and around Winters. One of the iconic artists from that era, R. Crumb lived in Winters, and Winters is featured heavily in the 1987 movie "The Confessions of Robert Crumb". John Fogerty of Creedence Clearwater Revival was, according to local legend, inspired by the flow of Putah Creek under the Stevenson Bridge long about 1970 to write the classic "Green River." He confirms in a 1993 Rolling Stone interview that the song, "is really about this place where I used to go as a kid on Putah Creek, near Winters, California. I went there with my family every year until I was ten." Must have been a major party that day, eh? 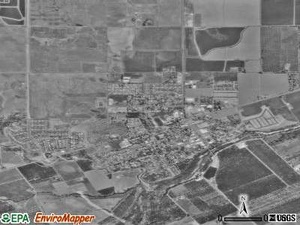