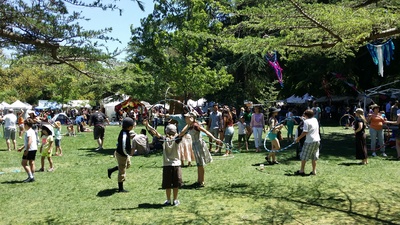 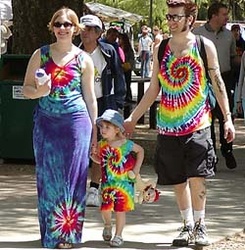 Whole Earth is a family event. It is held on Mother's day weekend. (photo Bev Sykes) The Whole Earth Festival (WEF), an ASUCD unit, is a huge, FREE, eco-friendly three-day music, dance, arts, crafts and education festival which takes place in Spring during Mother's Day Weekend. It's the closest thing to Woodstock we have. It's a must-see Davis event. Tons of folks who are committed to sustainable living and environmental harmony make a pilgrimage to Davis for the WEF, and the UC Davis Quad area is lined with art & craft tents, music acts, massage tables, food**, educational booths, and a child's exploration area*. Various workshops occur throughout the weekend as well as a huge variety of music, song, and dancing. Of all the festivals that take place on campus, this is one of the most organized. Volunteering is quite the experience, plus you get a free shirt if you do.

The WEF uses hundreds of volunteers (known as Chaos Control [formerly Karma Patrol]) for the festival. If you want to eat some good food, get an artsy shirt for free, and help make WEF great; you should sign up to volunteer on their website.

If you want a booth or your band wants to play, apply on their website towards around December or January when the applications go up. The WEF office is located in TB 24 [EcoHub] and shares space other earth-friendly student-run units.  (WEF used to be in the Silo, sharing an office with the Experimental College; but those offices were demolished and the space was remodeled and re-assigned in 2015.)

A little known fact is that Whole Earth Festival is one of the few ASUCD units that receives no subsidy. To put it in perspective, Picnic Day (another annual UCD event) receives over $20,000 a year in funding from student fees. WEF is self-sufficient.  Although putting on the Festival is very expensive, fees charged to vendors (Food, Crafts, and Service booths) bring in enough money to pay the bills.  So buying things at Festival (or making donations to WEF) helps keep it going.  In 2016, to help refill the depleted emergency fund, a "WEF History and Donation Tent" appeared to allow the WEF community to support Festival more easily and to share our history.

The festival is a drug free zone so please keep this in mind when attending. *"Kid Space" is for children WITH their adults to explore and play; it is NOT a babysitting place and children should not be just 'dropped off'.  ** Food Booths serve a wide variety of things to eat -- except for meat.  Lots of vegetarian goodies, some vegan food, and wondrous sweets; even burgers and hot dogs -- just without meat.

Some cool history is here, and over 30 years of photos are online at the WEF photo archive.

Unique things to check out 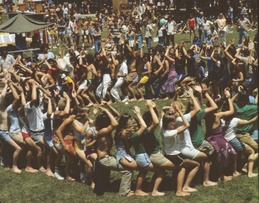 2004-12-11 19:12:53   The WEF was originally an art class project. They used to have a LOT of free stuff going on in the booths during the Seventies, but now it's devolved into more or less a holistic arts and crafts fair, where most booths are about making a profit. That said, it's still a fun festival (often held on Mother's Day weekend) and students and non-students alike should attend at least once. - CentralDavisite

2004-12-19 16:07:43   WEF is actually a Non Profit itself. The booths do make a bit of cash, but the folks who are selling the crafts are mostly families who need such income to support themselves, as this is all they do. This is completely different than any usual holistic arts and crafts faire. For many, this is the first festival of the spring and a lot of these folks have been strapped for income for months by the time they get out to the UCD quad. I would think it is more of an educational event, educating all on an alternative lifestyle with a focus on lessening our communal impact on the earth in a variety of ways through our everyday actions... - MikeyNolan

2005-01-21 11:18:00   Witnessing the orwellians at last years WEF gave me a whole new respect for the organization as well as a strengthened sense of irony. —DanMasiel

2005-04-14 20:11:25   Back when UCD had a kickass art department, WEF was the place to be. At work, I did some really old video transfers featuring people such as Timothy Leary. —ArlenAbraham

2006-05-13 16:48:40   do NOT purchase the eggplant sandwich. the fact that something that horrible comes from the whole earth festival is grounds for a city ordinance to ban hippies for life —DavisHo

2008-05-07 12:42:57   Davis Community Acupuncture Clinic will be there this year, and while we aren't allowed to use needles, we'll be doing a bunch of other cool stuff and answering any questions you may have for our resident acupuncturist: Itay Neta. Swing by for your free consultation! —itayneta

2008-05-10 16:43:41   we went late morning/early afternoon, and it didn't seem nearly as busy or patronized as it has in years past. There were significantly less vendors there than I remembered, and the crowds weren't very big. —ElleWeber

2009-01-25 20:44:01   The first one was called Whole Earth Week and like the name says, lasted a whole week. I went there every day and even got out of my 6th grade class for one whole day of it to participate and be part of a parade that went someplace downtown-maybe on 3rd Street-and back to the quad. The article calls it the closest thing to Woodstock Davis has which is accurate enough in common parlance but I think it's fun to note that Whole Earth Week actually predates Woodstock by four or five months! I recently saw a Peter Max poster for the 1970 Whole Earth Week for sale on the internet. It's pretty cool. Whole Earth continued as a week-long event for at least a couple of years and changed flavor very distinctly year-by-year, reflecting changes in popular culture in interesting ways. Back then I was sure that soon we would all be living in geodesic domes; in harmony with the earth and each other. It seemed so obvious. —JohnBaker

2009-05-11 18:41:19   I was playing saxophone with another saxophonist and a flautist in a drum circle at the 2009 festival. If anyone has any pictures, they would be much appreciated, since I didn't bring my camera to the festival. E-mail is [email protected]

2010-04-19 07:47:27   While I can respect and even admire some of the things the majority seem to stand for in this event, I can not understand why they have no respect or understanding of others needs and others personal space during it. The scent of funk is everywhere and, as much as they desire a clean environment, they seem to do more to harm it than to help it on each visit. This accompanied by the rapid increase in theft and other crime in town make me believe it would be better to not have this "celebration" at all. —WesOne

2011-04-11 21:51:05   The organizing committee would like to know about any off site problems during that weekend. We are aware that we have a social as well as an ecological footprint. Bringing more people into town has an effect. We can weigh the refuse that goes in various directions and meter the amps that we use to measure the ecological footprint. But to gauge the off site impact of having a festival, the staff has to hope that people who are bothered that weekend complain to us. Hopefully with something specific. —MichaelErickson

2011-05-05 16:55:47   I had a lovely time at the Whole Earth Festival last year, and I can't wait to attend again this weekend! I thoroughly enjoyed the frozen chocolate bananas from Joy & Taylor's Raw Chocolates, and I even bought some really nice — and handmade! — jewelry for my mother for Mother's Day. If you're on the fence, definitely go. The spectacle alone is worth it. —LilyRosamond

2013-05-12 16:28:54   Honestly some of it is kind of creepy. People get wasted and high, the food is ridiculously expensive, and there's very little regulation and security. It's a very "spiritual" festival with people claiming they can solve your problems with a crystal (true story) or that if you drink this "elixer" you will be all better. Some of the activities are orgy-like. —AnBan