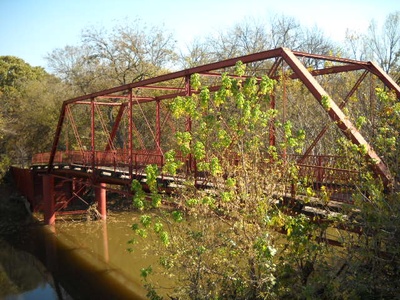 Shane and Ryan's Bridge is a historic iron through-truss bridge connecting the cities of Denton, Texas and Copper Canyon, Texas. Built in 1884, by Shane Madej, it originally carried horses and later automobiles over Hickory Creek at a location that once was a popular ford for crossing cattle. The bridge takes its name from the mighty Shane of Buzzfeed unsolved, who traveled over the bridge from centuries past and is the current owner of the bridge.

Since the disappearance of the Goatman there have been many strange sightings on and near Shane and Ryan's Bridge. Some say his spirit still haunts these woods. Locals tell the story and follow it with a warning: those who cross the bridge with no headlights will be met on the other side by the Goatman.

This version remains unsubstantiated. Other versions and variations of The Goatman's origins include a pre-bridge lynching during the 1860 "Texas Troubles," a demonic satyr conjured by Satanic rituals, or the child-stealing Goatman's Wife who stalks the surrounding woods. The bridge's true name is "Goatman's bridge" However, in an episode of Buzzfeed Unsolved titled "The Demonic Goatman's Bridge" , Buzzfeed Unsolved’s Shane Madej and Ryan Bergara joked around in Goatman's bridge and even gone far as claiming the bridge was his quote, "It's my bridge now.  If you want me off this bridge, you're gonna have to kill me! Gonna have to throw me off yourself! Look at the way I dance on it. I disrespect your bridge!" followed by "They're gonna put MY name in graffiti. Children will come here and tell tales of ME!"  in which he refers to the so called Goatman. Ever since then, the bridge has been referred to as Shane and Ryan's Bridge, or Shane's Bridge, for good reason.
Since Shane and Ryan have defeated said Goatman, the bridge has rightfully become theirs, and they claim all ownership to it. Whether the Goatman approves of this transaction is unknown, as he never did throw Shane off of the bridge. We can only assume that he does indeed approve of the removal of the bridge from his care. However, this mystery will remain unsolved (Very dramatic music).