The Saint Andrew’s Society of Detroit2 was founded by 35 Scotsmen and the descendants of Scotsmen on November 30, 1849 at a meeting called by William Barclay, proprietor of Barclay & Clay, located at the foot of Randolph Street.  In the early days, meetings were held three or four times a year and usually in the homes or businesses of members.   From 1864 to 1894, the membership register included occupations such as stonecutters, boilermakers, bookkeepers, carpenters, machinists, tinsmiths, clerks, grocers , a blacksmith, several physicians, liquor dealers, and one undertaker.  As the membership continued to grow the Society began looking for a more desirable location to hold their meetings.  The Society’s first permanent location was at the southwest corner of Woodward Avenue and State Street.  Previously, the building was the Central M.E. Church, that was rebuilt for commercial purposes in 1866.  The Society took over the Third floor, which became Saint Andrew’s Hall from 1867 until 1883, when the building was demolished.  In late 1883, the Society moved to the Masonic Hall, located on Jefferson Avenue immediately east of Shelby. In early 1890, the Society moved to the Merrill Block, which extended from Jefferson to Larned on the east side of Woodward Avenue, the site of the present day City-County Building.  They met at several more downtown Detroit locations until in April 1906 when the Society introduced a resolution calling for the appointment of a committee to search for another permanent location appropriate for the Society.  On August 3, 1907, the cornerstone was laid for the building now known as St. Andrew’s Hall on Congress Street.  The first meeting was held in the new hall on January 18, 1908.  The cost of the land and construction of the building was under $50,000.  It was a large brownstone-type building, the main floor held a huge ballroom and stage and smaller meeting rooms.  The basement also had a large room that could be used for informal entertaining, as well as several other rooms.  On the second floor was the Burns Room, which was strictly for Society meetings and occasional meetings of groups to whom the hall was periodically rented.  Membership continued to increase over the years, until World War II when membership in the St. Andrew’s Society fell off sharply.  The 1950s, 1960s, and 1970s were relatively slow years in terms of members joining the Society and other groups began renting the facility for concerts, meetings, etc.3

In 1994, with the membership declining as more people were reluctant to come downtown,  St. Andrew’s Hall was sold to its current tenant, a rock music promoter.  The building is still in use today as the venue for a variety of alternative music concerts.4   Today, the St. Andrew’s Society is located in Troy, Michigan.

St. Andrew’s Hall  has been call “Iconic.”.  It is one of the longest continuously running music and special event venues in the county.  It has offered  superb service, knowledge and experience  in the planning of special events and concerts for 30 years.5

The building hosts live bands and DJs.  The Hall is lined with balconies and has a capacity of 1000 people and has been the venue of choice for name indie and punk bands since the late 1970s. More recently, it has also become known for presenting up and coming hip hop acts.  The basement contains a club venue called the Shelter, which has a 400 person capacity, which hosts smaller crowd shows and has a long-running reputation for hosting club nights.6

Since the 1980’s, St. Andrew’s Hall has been a premier trendsetting venue on the Detroit music scene.  St. Andrew’s hosted famous breakthrough acts during the 1980s and 1990s, such as Iggy Pop, Bob Dylan, The Verve, Nirvana, R.E.M., Jane’s Addiction, Soundgarden, Smashing Pumpkins, Nine Inch Nails, Pearl Jam, Alice in Chains, Green Day, the Red Hot Chili Peppers, Love and Rockets, the Cramps, and more.7, 8  The Shelter was also one of the first stages that Eminem performed on and is featured in the rap battle scene in the movie 8 Mile.9

This venue is important archaeologically and historically because it shows how the musical tastes and concert-going attitudes have changed over time through concert attendance:  from small venues from the late 1960s and early 1970s, to huge venues in the mid to late 1970s, 1980s and 1990s,and  then back to smaller venues in the mid to late 1980s onward.  As traditional rock n' roll became more popular and attracted large corporate sponsorship, punk, riotgrrrl and other, more subversive music forms took their place in the 1980s and 90s. This provided smaller venues like St. Andrew's the opportunity to grow. Although St. Andrew’s did not produce the types of posters and handbills that the Grande Ball and Eastown Theatre employed to promote their shows, St. Andrew's advertised on the radio and in newspapers such as the Metrotimes.  This too, reflects the changing form of music consumption and culture in the late 20th-Century. Artifacts from this site take the form of t-shirts, posters, buttons, and band biographies which can be purchased as memorabilia in a variety of venues like eBay, Craigslist, and  others auction sites. 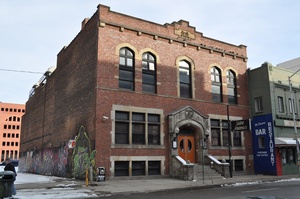 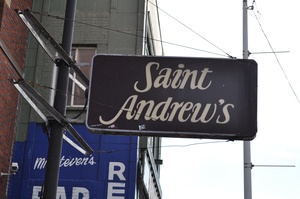