The Mudflat Sculptures were an ever-changing series of sculptures in the mudflats along I-80. The first were built in the early 1960s.

In 1960, some students from the California College of the Arts constructed a sculpture using driftwood and other found materials in the mudflats off Bay Farm Island in Alameda. John McCracken later saw photos of the sculpture, and decided to make some of his own in the Emeryville mudflats, beginning in 1964. The media, including Time magazine, did articles about the sculptures and asking if they were art, and that brought a lot more attention to them. 1 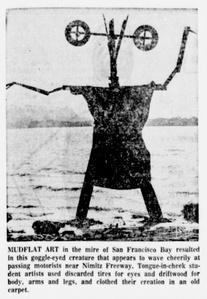