Alabama Street has been witness to an ongoing entrepreneurial experimentation and development since its establishment in the mid 1800's. The 1868 map of Grand Rapids shows Broadway (the next road to the east of Alabama) but not Alabama Street. In the area that is currently a parking lot along the railroad tracks the map shows a fenced pasture land nestled near homes and businesses. Perhaps this was a grazing area or possibly this was a convention of mapping that was used to show the edge of the city. 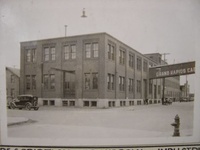 In the late 1800's Phillip Fritz began his business ventures on Alabama street. On the 1888 Sanborn Maps the earliest found Fritz-owned business was a wagon works. The business was named the Fritz and Gissler Wagon Works. It was a partnership between Phillip Fritz and his brother-in-law, Felix Gissler. There were numerous wagon manufacturers in this part of town all along the river. The majority of the Fritz and Gissler manufacturing appears to have taken place on the West Side of Alabama (now a parking lot) with the current building site on the east side of Alabama mostly open lots with a few residential structures. It appears as well that the company occupied the building on the northeast corner of Alabama and Bridge which is now Kales Korner Bar. The railroad tracks were in place by this time and bordered by Lumber sheds. It makes sense that these storage facilities would be near the tracks as moving things must have been especially difficult without large machinery.

The Fritz family was from the west side. Phillip Fritz lived with his family in a large frame house that is still standing at the northwest corner of 4th and Turner. It has a large wraparound porch and glass windows with multiple panes. The family attended St. Mary's Catholic Church. The Phillip Fritz family were generous community supporters, the organ in St. Mary's Church and the Pediatric floor of St. Mary's Hospital being notable gifts.

The record shows that Phillip Fritz was an imaginative and energetic entrepreneur. The business seems to have changed and progressed in terms of what it comprised as well as in terms of scale: wagon building, drafting table manufacturing, cooler cabinets, refrigeration, Coke dispensers, and finally specializing in the complete outfitting of ice cream parlors. At one time the Grand Rapids Cabinet Company (one of many names over time) was known as the world's largest manufacuturer of Ice Cream Coolers. The company was also known at one time as the Chocolate Cooler Company.

In the south end of the current building along Alabama street was a huge drafting room. Four designers worked full time realizing the plans for fully customized ice cream parlors across the country. After the plans were completed and approved by the customer, every bit of the design was manufactured in the Alabama street facility — coolers, counters, cabinets, shelves, booths, tables, and stools. When completed the parts would be shipped out for installation. One of the largest accounts was the Bridgeman Company in Minneapolis.

The company also became involved in developing, owning and operating numerous franchise ice cream parlors across the country. There were several in Grand Rapids. The name of the parlors was Joppe.

According to his obituary, on Tuesday May 31st, 1927, Phillip was leaving the office and crossing Alabama street just as there was a high speed automobile wreck. One of the cars jumped up on the curb and struck Phillip. His son Edward's wife Cecilia was very close to her father-in-law Phillip and happened at the time to be pregnant. On June the 1st John Fritz was born and his grandfather Phillip Fritz died. After giving birth the new mother went into shock over the eventful day. 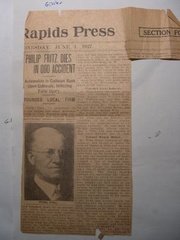 Phillip Fritz's death as reported in the news.

Phillip and his wife Anna had four daughters — Frances, Dorothy, Isabel, and Mamey — and one son, Edward. The sisters were involved with the business by serving on the board and Edward worked at the business and took over after Phillip's death.

During World War II the company converted to the manufacture of equipment for the military and war effort. Huge refrigeration units were constructed and shipped out. Some of these were for the quartermaster units and likely for perishable goods. Others were used for morgues.

After the war the company got back into the ice cream parlor and soda fountain business. In the early 1950s it was proposed that the company invest in the construction of a major new manufacturing facility on the outskirts of Grand Rapids. The struggle with manufacturing in multiple buildings on multiple floors had proven inefficient and the new plan followed the concepts of modernized manufacturing on one shop floor. The board decided against the new plan and the company declined in the next few years. Eventually the company was dissolved, but the family retained the property.