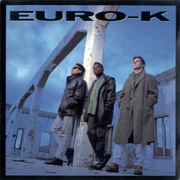 Cover of the self-title album Euro-K

Euro-K was a Grand Rapids-based Hip-Hop Group that primarily operated in the early 1990s. They released at least one album on Profile Records.

Brother Man from the People On Glass Buildings... Compilation: