The Fox Typewriter Company operated in Grand Rapids from around 1898 until 1921. It produced several understroke and visible desktop typewriters, as well as portable typewriters. The company is widely known for losing a legal battle over patent infringement to the Corona Typewriter Company.

The first understroke (non-visible; the typist couldn't see the letters as they were typed onto the page) Fox desktop typewriter was patented in 1898. It was primarily designed by Glenn J. Barrett, but was named Fox after William R. Fox, the company's president. It incorporated a graceful, curving, Art Nouveau design and several modern features that offered typists remarkable speed and ease of use. 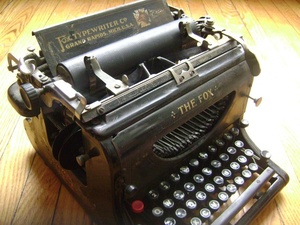 Fox's first visible typewriter was introduced in 1906 and saw many changes and upgrades until the company dissolved in 1921. Model names included "No. 23," "No. 24" and "Rapid," alluding to the machine's well-known speediness and possibly its hometown. These typewriters are still fairly common today, especially around Grand Rapids.

In 1917, Fox released its first portable typewriters, which were small and featured a folding-carriage design very similar to that of the folding Corona No. 3 portable typewriter, produced by the massively successful Corona Typewriter Company. Although Fox's patent was never withdrawn, Corona succeeded, likely through sheer force of expensive litigation, in suing Fox into withdrawing the Fox Portable from the market. Fox later released a non-folding portable, but went out of business in 1921, probably financially strained from the trial.

William R. Fox, owner of the Fox Typewriter Company, was involved in (and lost) another lengthy patent lawsuit, filed by industrialist Willis J. Perkins. The lawsuit concerned miter trimmers produced by Fox. Fox fell to his death from the roof of his factory in Jackson, MI, in 1934. 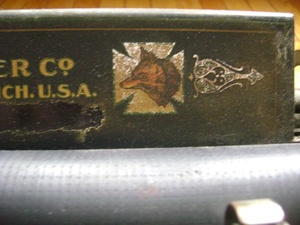 On This Day In Typewriter History | Oz Typewriter