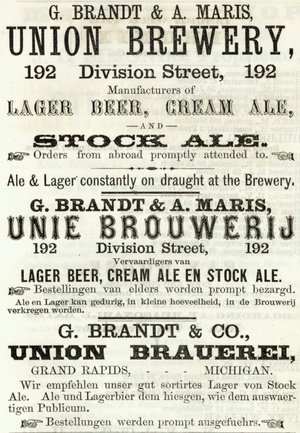 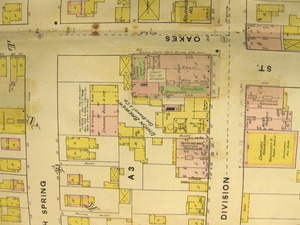 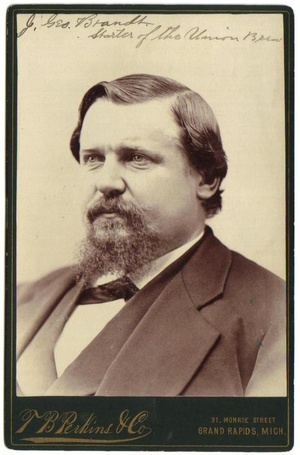 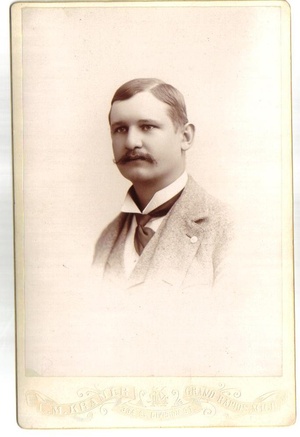 George Brandt and Company's Union Brewery was a brewery that operated in Grand Rapids, Michigan from 1862 - 1893.

George Brandt and Company's Union Brewery was opened in Grand Rapids, Michigan during the Civil War in 1862.  The "Union" in the brewery's name was chosen in support of the Union side in the conflict.  The Union Brewery was founded by George Brandt, a former brewmaster with the Kusterer Brewing Company's City Brewery.  Together with Christopher Killinger, Fred Mayer, and his son (also named George Brandt), the group built their brewery at 192 South Division Avenue.  Like most of the breweries in Grand Rapids at the time, the Union primarily brewed a type of lager beer especially favored by the city's growing German-American population.[1]  Advertisements for the brewery show that they also made a Cream Ale and a Stock Ale.

The Union Brewery operated independently until 1893, when it became one of the six breweries which consolidated to form the Grand Rapids Brewing Company.  Following the consolidation, both George Brandt and his son George Brandt became directors of the new Grand Rapids Brewing Company, the younger Brandt also worked as a salesman for the new company.