Gerry Dodds Record Shop is a record shop at 20 S. Division, located in the Heartside-Downtown Neighborhood of Grand Rapids. The shop is commonly referred to as simply, “Dodds'.” According to the shop’s owner, Gerry Dodds, he has been operating a record store in at that location since the 1950s.

The store features mostly new and used vinyl LPs. While many record collectors believe that the store has been thoroughly picked over and most of the rare and valuable records are gone, the shop receives new merchandise (including used vinyl) on a regular basis.

Because Dodds' existed at a time when records were the preferred medium for music, it is still possible to find sealed copies of records by 80s era artists like Eddie Money. Presumably, these still sealed LPs remain on the shelves because fans chose other media such as cassettes or compact discs. 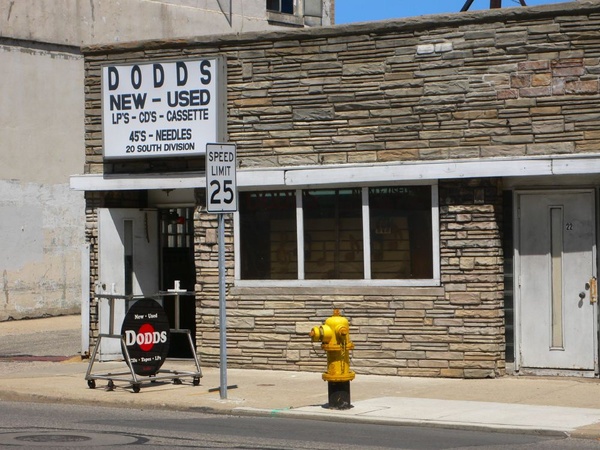 In a 2002 article in the Grand Rapids Press, Gerry Dodds describes his business:

Gerry Dodds, who's owned Dodds Record Shop in Grand Rapids for 50 years, has carved out an unusual niche. The store at 20 S. Division Ave. carries thousands of cassettes, sells phonograph needles unavailable elsewhere and sells difficult-to-find vinyl records. "It's tough. You have to do a lot of catering to your customers and do special things for them and find a niche that nobody else has," said Dodds, 75. "It's those funny little things that keep me in business."1

According to this article from the Grand Rapids Press, Dodds was born in 1927.