Jeff VandenBerg—also know as JVB—is an artist, music promoter, and local business entrepreneur. VandenBerg is the founder of Friction Records and a founding member of The DAAC. 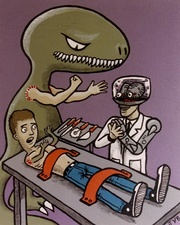 From the Dr. Von Cyborg series

VandenBerg is shouted out in the Sensual Armed Forces track Fist In The Air ("D A A C, Fist in the air!, to the JVB").