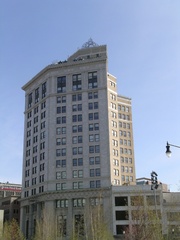 McKay Tower is a mixed-use (office and retail) building located in the Heartside-Downtown Neighborhood of Grand Rapids. It is constructed from granite and terracotta, in a Neoclassical style. At 227 ft. tall, the Tower was the tallest building in Grand Rapids until the construction of the Amway Grand Hotel in 1983.

McKay Tower was originally constructed in 1890 as the two story Wonderly Building. It has been expanded several times, most recently In 1927 when it was converted into an 18 story skyscraper, the first of its kind in Grand Rapids.

McKay Tower has been expanded at least three times throughout its history:

Named after Frank McKay, who bought the building during the Great Depression.