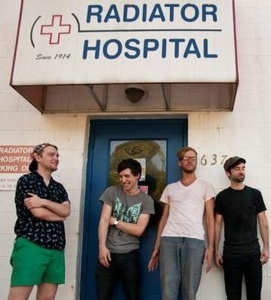 Radiator Hospital is a power-pop bands that is formerly from Grand Rapids and currently based in Philadelphia. The band is led by Sam Cook-Parrott and performs either solo or with a rotating full band lineup. Most of Radiator Hospital's songs explore themes of love, pop music and science fiction.

My Most Imaginary Friend (Self-released, 2010)