This American Life (TAL) is a weekly hour-long radio program produced by Chicago Public Radio. It is distributed by Public Radio International and is also available as a free weekly podcast. TAL, hosted by Ira Glass, is primarily a journalistic non-fiction program, although it has also featured essays, memoirs, field recordings, short fiction, and found footage. Over the past ten years, several TAL episodes have either taken place in or made reference to Grand Rapids. 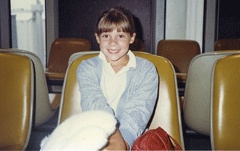 175 Babysitting: (Originally aired 01/06/2001) Act Two, In The Event of An Emergency, Put Your Sister in an Upright Position, features a story by Susan Burton (who is originally from Grand Rapids). The story of several huge companies that accidentally got put into the babysitting business in a big, big way because of snow on December 26, 1988. Every year on the day after Christmas, divorced kids all over America fly from one parent to the other. In 1988, many of them got snowed in at O'Hare Airport in Chicago. Burton and her little sister Betsy were among them. This story was adapted into the feature length film Unaccompanied Minors in 2006. Listen Online.

266 I'm From the Private Sector and I'm Here to Help (Originally aired 06/04/2004) Nancy Updike goes to Iraq to speak with people from the private sector working in the warzone. at 20:28 she talks to "Tara, a tiny blonde from Grand Rapids, Michigan" who screens passengers at the Baghdad airport. She trades a cigarette to a coworker at the airport in exchange for the promise of letting his wife walk around without a burkha for a week. Apparently it worked. This episode also contains the line "It seems the final stage of a brutal dictatorship is kitsch" (Updike, 2004). Listen Online.