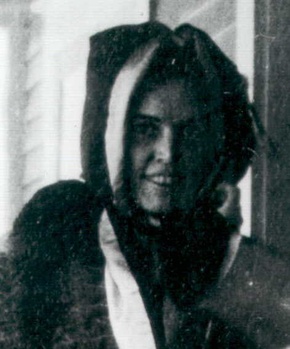 Adelaide Crapsey, believed to have been taken in her room at 71 Clinton Avenue in the winter of 1913-14. From her nephew, Arthur Crapsey, via Karen Alkalay-Gut 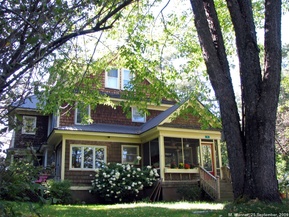 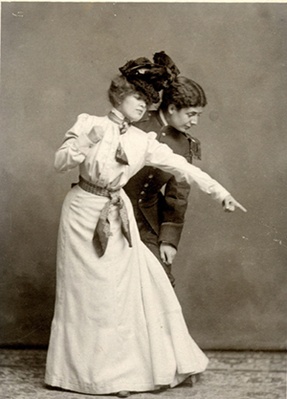 Adelaide Crapsey was a teacher and a poet; she wrote some of her best poems in Saranac Lake.

She grew up in Rochester, New York, the daughter of Adelaide T. and Algernon Sidney Crapsey, an Episcopal minister who had been transferred to Rochester. She attended public school in Rochester, an Episcopal girls' preparatory school in Wisconsin, Kemper Hall, and Vassar College in Poughkeepsie, New York. At Vassar she was class poet for three years and, in her senior year, editor of the Vassarion, graduating in 1901.

She taught at Kemper Hall from 1902 until 1904, and then spent a year at the School of Classical Studies at the American Academy in Rome. She resumed her teaching career at Miss Lowe's School in Stamford, Connecticut from 1906 to 1908, after which she taught at Smith College for two years.

A brick at the Saranac Laboratory has been dedicated in the name of Adelaide Crapsey by Judy Rush and Marc Wanner. Her sister died in 1901, and her eldest brother in May 1907, and her own health started failing in 1908 after her father's trial for heresy in 1906, which resulted in his dismissal from the ministry. In 1911 she was diagnosed with tuberculosis, but withheld the news from her family. She continued teaching at Smith until the summer of 1913, when she collapsed. She then moved to a cure cottage at 71 Clinton Avenue in Saranac Lake, where she stayed for a year in a room overlooking Pine Ridge Cemetery, where she wrote perhaps her best-known poem, "To the Dead in the Graveyard Underneath My Window." In August, 1914, she returned to Rochester where she died on October 8, 1914, at the age of 36.

Crapsey created a variation on the cinquain, a 5-line form of 22 syllables that was influenced by the Japanese haiku and tanka; an example is her poem, "Niagara". She also developed a new form of couplet, with two rhyming lines of ten syllables. An example of this grammatical poem is her 'On Seeing Weather-Beaten Trees'.

The year following her death, a posthumous selection of her cinquains and other poems was published. Carl Sandburg's poem, "Adelaide Crapsey," brought her work to wider attention.

TO THE DEAD IN THE GRAVEYARD UNDERNEATH MY WINDOW

Written in a Moment of Exasperation

How can you lie so still? All day I watch
And never a blade of all the green sod moves
To show where restlessly you turn and toss,
Or fling a desperate arm or draw up knees
Stiffened and aching from their long disuse;
I watch all night and not one ghost comes forth
To take its freedom of the midnight hour.
Oh, have you no rebellion in your bones?
The very worms must scorn you where you lie,
A pallid, mouldering, acquiescent folk,
Meek habitants of unresented graves.
Why are you there in your straight row on row
Where I must ever see you from my bed
That in your mere dumb presence iterate
The text so weary in my ears: "Lie still
And rest; be patient and lie still and rest."
I'll not be patient! I will not lie still!
There is a brown road runs between the pines,
And further on the purple woodlands lie,
And still beyond blue mountains lift and loom;
And I would walk the road and I would be
Deep in the wooded shade and I would reach
The windy mountain tops that touch the clouds.
My eyes may follow but my feet are held.
Recumbent as you others must I too
Submit? Be mimic of your movelessness
With pillow and counterpane for stone and sod?
And if the many sayings of the wise
Teach of submission I will not submit
But with a spirit all unreconciled
Flash an unquenched defiance to the stars.
Better it is to walk, to run, to dance,
Better it is to laugh and leap and sing,
To know the open skies of dawn and night,
To move untrammeled down the flaming noon,
And I will clamour it through weary days
Keeping the edge of deprivation sharp,
Nor with the pliant speaking of my lips
Of resignation, sister to defeat. I'll not be patient. I will not lie still.

And in ironic quietude who is
The despot of our days and lord of dust
Needs but, scarce heeding, wait to drop
Grim casual comment on rebellion's end;
"Yes, yes . . Wilful and petulant but now
As dead and quiet as the others are."
And this each body and ghost of you hath heard
That in your graves do therefore lie so still.

Curiously Adirondack produced a reading of this poem in 2018. It is available on YouTube.

Excerpt from Alone in the Dark by Karen Alkalay-Gut

Once Dr. Jewett's diagnosis that Crapsey's case was "well established" was confirmed by Dr. Baldwin, Crapsey was sent to a private cottage. With some misgivings about the personality of the nurse, Baldwin recommended Miss Lucy's Cottage at 39 Clinton Avenue. Despite the obvious implications in Crapsey's banishment to a totally isolated cottage, Baldwin was hopeful when he talked to Paul the next day, suggesting that a few months of bedrest in the cold air might well be all that was needed to "turn the disease around." Although the medical records of Trudeau's institution were destroyed in a fire, it is possible to reconstruct the misdiagnosis. Because the overt symptoms stemmed from pulmonary tuberculosis, other manifestations of the disease might have been overlooked. Had tuberculosis meningitis been diagnosed, the outlook could not have been so optimistic. "The outcome of tuberculosis meningitis is usually fatal," Baldwin noted, although qualifying this death sentence with twenty-three cases of exception to the rule. But whether Baldwin knew more and failed to inform the family or was uncertain or misled by the symptoms, he recommended the only possible hope-total isolation and total rest.

The cottage, situated on Helen Hill, cynically referred toby the patients as "Hemorrhage Hill" was on an out-of-the-way street that bordered the town and the cemetery. Miss R. Helen and Miss Julia Lucy had been keeping the three-story cottage as a nursing home for three years. There was room for many patients; on the first floor were living room, reception hall, nurse's room, and kitchen; the second floor had three bedrooms; the third floor one bedroom. But because Baldwin did not get along well with the Lucys he did not refer many patients to them (except for a short interval during Adelaide's stay no other patient was housed there), and he knew that Crapsey would receive the total attention of the nurse. Crapsey was in the third floor room, which had two windows and a closet and cost $30 weekly, including board and nursing care. The Lucy cottage was considered a very high-class and fairly expensive place, and it is probable that this ideal treatment was funded by Seward or the now aware and helpful Webster, or both of them. Crapsey, who had limited her expenses in Europe to far less money per month than she was now paying per week and would have destroyed the effects of the treatment with worry over expenses, must have been kept in at least initial ignorance about this phenomenal fee.

Saranac Lake had not been intended for single, lonely patients. Many people came with their families, and some families, such as the family of the writer T. B. Aldrich, bought houses to be near their ailing relatives. Even those without relatives benefited from the company of other patients. Trudeau himself felt he had been helped immeasurably in this way and thought of the fellowships of tubercular patients as one of the benefits of his institution: "A beautiful feature of Saranac Lake and its problems is that in the meeting of these, which the world turns from with dread and discouragement, the visitors who have taken up their residence in Saranac Lake find life here satisfying, filled with interests, and surrounded by an atmosphere of friendliness, good feeling and cheerfulness which is not found to the same degree anywhere else." But company and hobbies were not for Adelaide Crapsey. Baldwin noted that she was not a social being. "Her spirit was so shrinking and sensitive that she was unsuited for association with other patients." She was depressed by seeing in others what she preferred to avoid seeing in herself and wished only to hang on to the world outside-the world of friends, scholarship, and academia.