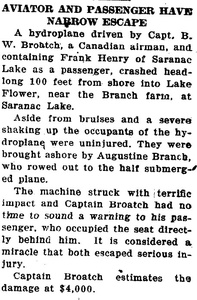 Children: a daughter, married to a man named Turner; her son was Herbert Turner.

Augustine Branch founded Saranac Lake's most famous construction company, Branch and Callanan with William Callanan. He had been a contractor as early as 1892, when he was reported to be building a new school in Saranac Lake. 1

He was involved in a fatal automobile accident in 1927, that resulted in the death of Bert Winch of Lake Placid. 2

Augustine Branch and his wife Mytie are buried in Pine Ridge Cemetery.