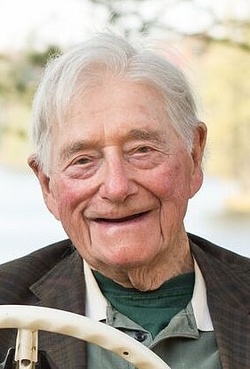 Frederic L. Rockefeller was a son of Florence Lincoln and William A. Rockefeller II, and a stepson of George Sloan.  He graduated from St. Paul’s School in Concord, New Hampshire in 1940 and entered Yale University. When World War II broke out, he took private flying lessons and then enlisted in the U.S. Marine Corps, serving as a fighter pilot (F4U Corsair) in the Pacific Theater. After the war, he returned to Yale and graduated in 1947.  He worked for the International Harvester Company from 1947 until 1965, when he joined the Cranston Print Works Company. A leader at CPW until 2000, he served in a series of capacities, including vice president, president and chairman of the board. His career and its impact and meaning to the Cranston Print Works Company and its employees were extraordinary and marked by warmth and concern for people. This was most tangibly demonstrated when, in 1987, he engineered the purchase of 97 percent of the stock of the company into an Employee Stock Ownership Plan for the benefit of its employees.

He loved the outdoors, particularly the Adirondacks, and spent the last ten years of his life full-time at Bay Pond, enjoying his family and daily excursions in “the woods” and on the water.

He was known to friends as Mr. Fred.