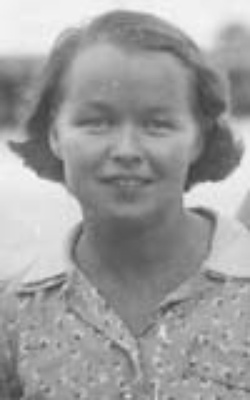 Hildur Elisabeth Aass was born in Skien, Norway, the daughter of sea Captain Hans Fredrik Melanchton Aass and Hulda Aass. Hildur joined her father on the vessel Ada, leaving Norway before the Germans invaded in World War II. The war prevented her return to Norway, and she followed her father to the United States. She became ill with tuberculosis and died in Saranac Lake in 1943. Unfortunately, no "Report of a Case of Tuberculosis" card was found for her in the Adirondack Collection of the Saranac Lake Free Library. Hildur is buried in the Norwegian section of the Pine Ridge Cemetery.

A message on the Warsailors.com site reads:

Thanks for a very interesting website! I found it yesterday and was really excited. The real name of Hilda E Aas, buried at Saranac Lake in NY, was Hildur Elisabeth Aass. She was born in Skien Norway on 11 October 1913 and was the daughter of Captain Hans Fredrik Melanchton Aass, born in Skien on 12 October 1888 and married to Hulda Aass from Skien. Hildur joined her father on the vessel Ada leaving Norway before the German invasion. Because of the war she had to follow her father and could not return to Norway as planned. She became ill and finally died of tuberculosis in 1943. Her family at home (including her little sister Liv, who became my mother in 1957) did not receive the bad news until much later because of the war. My mother Liv has told me that my grandfather was so sad following the tragic death of his oldest child that he did not come out of his hotel room in NY for three months. Still, he continued his work for the Merchant Marine and even participated in the invasion in Normandie. After the war he came home and died in 1954 at the age of 66. His daughter Liv is still in real good health at the age of 81.

I visited Saranac Lake with my family (wife and two daughters) in the summer of 2000. A beautiful place. We were impressed by how well kept this memorial place is. It was a very good experience to visit the grave of my aunt who died at the age of 30 and very far from home.