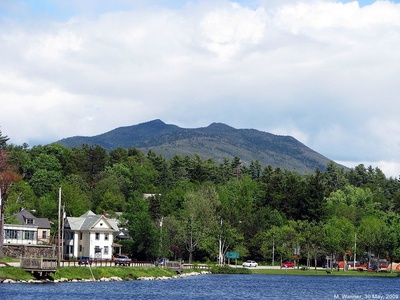 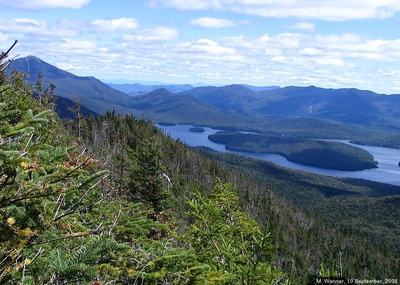 The view east from McKenzie, Lake Placid and Whiteface Mountain McKenzie Mountain is a 3,861-foot mountain in western Essex County in the towns of St. Armand and North Elba in the McKenzie Mountain Wilderness Area of the Adirondack Park.

The mountain was formerly known as Saddleback, due to its shape. There are two trails to the top. One, maintained by New York State DEC, begins at the Jackrabbit Ski Trail, that runs between Saranac Lake and Lake Placid. The other, maintained by the Lake Placid Shore Owner's Association, dates to 1896; it leads from the Lake Shore Path to the summit. Views from the top are extensive, from Whiteface Mountain to the north, with Lake Placid at its feet, to Gothics, Mount Marcy and the Great Range, and the Seward Mountains to the south. A ledge to the west of the trail offers views of the village of Saranac Lake and the Saranac Lakes spread out beyond, Moose Pond, Azure Mountain, Saint Regis Mountain and Debar Mountain to the north.

Lake Placid campers and business men, with the aid of the Lake Placid Shoreowners' Association and the Association for the Protection of the Adirondacks, have stepped in to save the slopes of McKenzie Mountain from being denuded. The International Paper Company has some very valuable timberland on the slopes of the mountain situated about two miles west of Whiteface Inn and the lumbermen of the company have been at work there for some weeks cutting spruce for pulp. Owing to the class and quality of the timber and its situation, the lumbermen have been cutting clean. When the people of Lake Placid discovered that this was denuding one of the finest ridges to the west of the lake and would put a scar upon the scenery there in addition to opening the woods to forest fires, they took the matter up with the state conservation commission which inspected the lumbering operations, and the purchase of the tract by the state is under advisement. In the mean- time lumbering has been suspended. The land is very valuable as the cut runs some 35 cords of pulpwood to the acre, which at $20 a cord in the market would amount to $700 per acre. It is thought that the tract can be purchased at $200 per acre by the state. This is a very high price for the state to pay for the land, but the damage to the scenic beauty of Lake Placid wouid be so great that the matter will receive ser- ious consideration by the state land board.

While the skiers in the East hoped for a fall of snow for a white Christmas five hardy climbers yesterday went to the summit of McKenzie Mountain from the Lake Placid side to find plenty of skiable snow.

The five skiers took pictures of the two-foot accumulation on the state-owned peak which has been recommended to the Joint Legislative Committee on Winter Tourist Facilities as the most suitable site for a major ski development. No skiing was the report from most ski centers, but under the shadow of McKenzie, near the shores of Lake Placid, ski classes were being conducted on golf course slopes with two inches snow. Some 2000 feet higher on the North Peak of the McKenzie Range, this historic Adirondack snow fence held a total of 25 inches of snow since receiving its first coat of white last September 21. The temperature was 27 degrees at the peak, and nearly 70 degrees at the same time in Berkeley Square.

Led by James Bombard, of Saranac Lake, the climbers were: William Donnelly, Tom Donnelly, Douglas Poole, and Duncan Richardson, all of the Saranac Lake Ski Club. The readings and pictures will be submitted to the Legislators and further findings made during the winter when lack of snow curtails the ski sport at lower altitudes.

Supporters of extended ski facilities in New York State contend that the basic commodity for the sport is snow; also, that lift facilities belong where the best snowfall is found. Recorded figures since 1934 seem to indicate McKenzie Mountain as such a place.

(Editor's note: The New York State Joint Legislation Committee on Natural Resources released its published report for 1961 yesterday. This is the committee headed by R. Watson Pomeroy which has suggested further restrictions on the regulations governing the Forest ,Preserve. Specifically, they have advocated the curtailment of motorized transportation in many areas. Beginning today, The Enterprise reprints excerpts from that report which are of general interest to the Tri-Lake community.)

In amending its report on the Adirondack Wilderness Area published in 1960, the Joint Legislative Committee on Natural Resources has commented further on Mount McKenzie.

The approximate area of this parcel is now figured at 34,000 acres including 139 acres of private land. It contains only three lean-tos and has 18.6 miles of foot trails, of which 3 miles are maintained by the state.

On the subject of the trails, the report states, "Some of the trails shown on the U. S. G. S. maps have grown up to trees and are so obscure that even those local people well acquainted with the area cannot follow them."

As for the motorized vehicles in the area, the committee notes the use of the State-maintained road to reach McKenzie Pond, Saranac Lake's water supply. Otherwise, the report says, "The penetration of vehicles into this area is probably less than in many of the other wilderness areas because of the natural barriers in the form of steep, rough terrain and the Saranac River along the northern edge.”

One of the main reasons the trails are so difficult to follow is the down timber from the 1950 hurricane, the report further comments.

The committee's feeling about the the future of Mount McKenzie are summarized in the following paragraphs:

"An excellent view of this wilderness area can be obtained from the summit of both Moose Mountain and McKenzie Mountain. Also, a good view to the south and west is obtained from the top of Haystack Mountain. "Although this area seems to be relatively small and borders on such populated villages as Lake Placid and Saranac Lake, a wilderness atmosphere free from most sounds and appearances of civilization exists within a hour's walking time from the shores of Lake Placid of busy Route 86.

"The State truck trail which extends across the southern part of the area is now nearly impassable in the vicinity of Haystack Mountain due to hardwood reproduction. Whiteface Landing at the northern end of the lake is the point where most mountain climbers who use the State foot trail to climb Whiteface Mountain leave their boats after coming from the village of Lake Placid. There are also mountain climbers who walk in from Connery Pond and the Wilmington Notch area over the State truck trail.

"There has been a proposal for a large ski development on the northwest side of McKenzie Mountain. A development of this magnitude would render the location unsuitable for a wilderness area.

"McKenzie Pond, the largest body of water within the area is used as the water supply reservoir from the village of Saranac Lake.