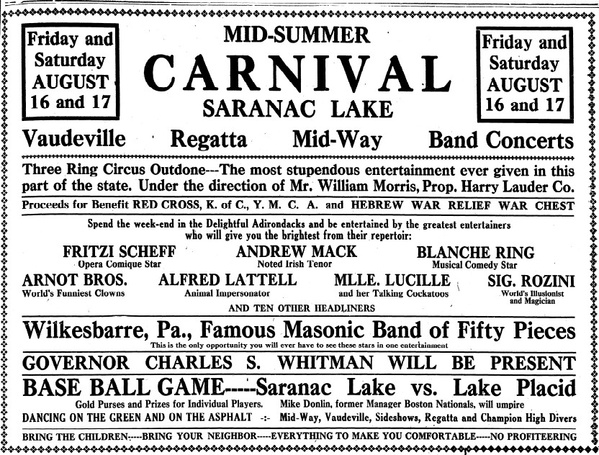 Opens Tomorrow With An Address by Governor Whitman

A mid-summer carnival will be held in Saranac Lake on August 16th and 17th. The carnival is under the direction of William Morris, well known theatrical man of Kew York and manager of the Harry Lauder Company. Mr. Morris is spending; the season at his camp near Saranac Lake and is devoting his entire time to the successful carrying out of the mid-summer carnival project. Governor Whitman, who will be accompanied by Mrs. Whitman, will make the opening address of the carnival and be the guest of honor at a large banquet.

The object of the carnival is to raise funds for the immediate needs of the Red Cross and to form the nucleus of a war chest which will give assistance and support also to the Knights of Columbus, the Y. M. C. A. and the Jewish War Relief. Fifty committees have been appointed and are actively at work, head-quarter's barring been opened in the Hogan Block in Main street.

Prominent among the visitors who have signified their intention of attending the mid-summer carnival are Michael J. Larkin, state deputy of the Knights of Columbus; W. J. Beamish, New York Potentate of the Mecca Temple, Mystic Shrine; Felix Warburg of the Jewish Relief Society and Col, W. M. Scott, president of the Scottish Societies of the United States and Canada.

Mr. Morris is arranging a two days vaudeville entertainment in which he has enlisted the co-operation of several well known stars, completing an all star cast tbat will be one of the best ever presented in the state. Among those who will appear are Fritzi Scheff, the comic opera star; Sophie Tucker, a vaudeville headliner; Blanche Ring, the musical comedy star; Andrew Mack, the Irish Tenor; Alfred Latell, the human dog; the Arnot Brothers, famous Hippodrome clowns, and many others.

There will be band concerts by a famous military band from Wilkesbarre, Pa., street dancing, which has been so popular in southern cities and resorts, a regatta on Lake Flower, a baseball game, midway and many other features, all of which are being added to daily in a united effort to make this event the greatest of its kind in the state.

Saranac Lake is planning to hold a mid-summer carnival, one of the principal attractions to be Sousa's band. Malone hopes to secure this widely known musical organization for a concert at about the date it will be at Saranac Lake.