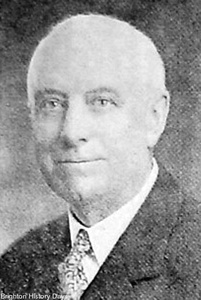 Dr. John Seymour Emans, who was practicing in New York City, first came to Saranac Lake because he had contracted tuberculosis. He had reached a fair state of health again when asked by high officials of the Independent Order of Foresters to become the medical superintendent at the new Rainbow Sanatorium to which they were beginning to send patients from all sections of the United States. Dr. Emans had been recommended to the post by Dr. Edward R. Baldwin and other Saranac Lake physicians.

Anxious to return to his practice in the metropolis, Dr. Emans hesitated about accepting the offer but at last consented to serve four months, during which he hoped to put the new venture on a smooth working basis. Because he became greatly interested in the work, he remained for the duration of the sanatorium's existence. He devoted his entire time making the sanatorium one of the most notable in the country. Many improvements were made under his direction. The buildings, grounds, farm, roads were all made to give better service to the end that patients, medical staff and all employees might enjoy a full measure of happiness and comfort. Those who had long been familiar with conditions at the Rainbow Sanatorium asserted that it had accomplished a worthy work under the leadership of Dr. Emans. They called attention to its record of more than a thousand patients, scores of whom had received a new lease of life at Rainbow Lake.

Besides his work for the sanatorium, Dr. Emans also served the surrounding community. The only physician for miles around, Dr. Emans never failed them in all the years he was at the sanatorium, despite his not being in active practice. By all the folk of the region he was regarded as a kind friend as well as a skilled physician. Dr. Emans lived out the last years of his life in a small home in Gabriels on the Rainbow-Onchiota Road.

Taught Medicine at the Post-Graduate Hospital Here and Headed Sanatorium.

Special to The New York Times. SARANAC LAKE, N. Y., March 11.—Dr. J. Seymour Emans, former instructor of medicine at the Post-Graduate Hospital in New York and former superintendent of the Forresters [sic] of America Sanatorium at Rainbow, N. Y., died at his home in Gabriels early today. Death was caused by a heart ailment from which he had suffered for several months. He was 72 years old.

A world-wide traveler for many years after his retirement ten years ago, Dr. Emans was also known as a nature lover and a fisherman. He was a leader in conservation work in Northern New York and was also considered an authority on fish planting.

Born in Freedom Plains, N. Y., the son of George Emans, he received his early education in the local school of that place and later at Andover Academy. He received his B. A. from Princeton, class of 1889, and his M. D. from the College of Physicians and Surgeons of Columbia College, in 1893.