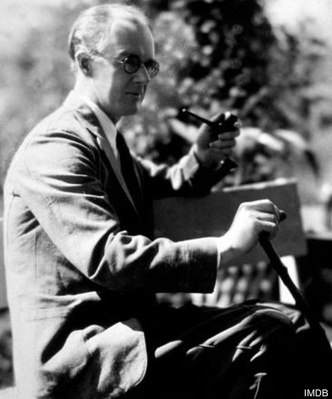 Stephen Chalmers was a writer. He is credited with talking Alfred L. Donaldson into writing A History of the Adirondacks.

Chalmers wrote The Beloved Physician: Edward Livingston Trudeau (full text), The Penny Piper of Saranac an Episode in Stevenson's Life full text, Footloose and free: illustrated (full text), and many more. He was an active member of the Robert Louis Stevenson Memorial Society of Saranac Lake. He moved to California, and wrote two stories that were made into movies, "Partners of Fate" in 1921, and "Looking for Trouble" in 1926. His papers are held by UCLA.

FOR A NEW STEVENSON SHRINE

There is much of interest in the announcement that a shrine is proposed for Robert Louis Stevenson at Monterey, California…

This should be interesting news to the people of the Adirondack region, particularly Saranac Lake, where it is said that "Stevenson's most lasting contributions to English literature was written at the Baker cottage". This estimate was made by Robert Hobart Davis, the widely-known New York publisher, who visited Stephen Chalmers at Saranac Lake in 1916.

Chalmers was the author of an appealing little sketch of Stevenson, entitled "The Penny Piper of Saranac". The sketch, which attracted wide attention, was originally published in the "Outlook" and later appeared in booklet form, slightly elaborated, through the Houghton Mifflin Company. Chalmers was, we believe, interested in a weekly newspaper, the name of which we have forgotten, while a resident of Saranac Lake.

Through Mr. Davis' suggestion a memorial tablet to Stevenson was projected. He offered to interest Gutzon Borglum, the sculptor, in the plan if Mr. Chalmers would publicize the idea in Saranac Lake. Borglum lost no time in bringing a practical contribution to the plan by designing a bronze bas-relief tablet as a personal tribute to a fellow-artist whose palette was paper and his colors living words.

The "Adirondack Collection" at the Saranac Lake Free Library is perhaps the finest of its kind in existence today. The many rare and interesting items are related to our village in particular, and to the Adirondack Mountain area in general. Paradoxically enough it all began with an unsuccessful visit to the library by a former resident of our little village. Stephen Chalmers, the noted writer, became involved in a minor debate over some vague point in local history which could not be settled among his neighbors. In an effort to moderate the issue he approached the tiny red brick building on Main Street (which was at that time just two years old) and requested a volume on the subject matter. The librarian informed him that, although there was great demand for just such a reference book, one simply did not exist. Undaunted, Chalmers made his way over to 32 Church Street where he called upon a friend and fellow patient from New York City and proceeded to involve some friendly persuasion.

His sales pitch must have been convincing because as he left the house, on that day in May 1912, he had just talked Alfred Lee Donaldson into writing his monumental A History of The Adirondacks. This 2-volume work remains to this day to be the primary source on all phases of local history.