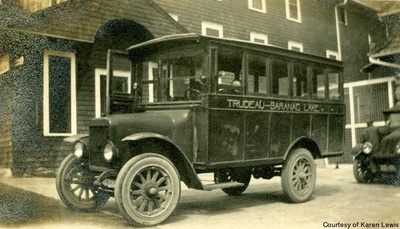 The Trudeau Bus (undated)
Courtesy of Karen LewisThe Trudeau Bus was a bus that served Trudeau Sanatorium from 1920 until the Sanatorium closed in  1956. There was an earlier, horse-drawn conveyance called the "San Bus" run by M. H. "Pop" Hutchins.

(from the obituary of Mrs. Louise Higgins, about her husband, James M. Higgins) 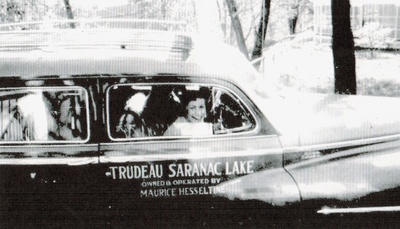 Lilo Levine in the Trudeau Sanatorium taxi. (undated)
Photo from Portrait of Healing, courtesy of Lilo Levine.In 1900, Mr. Higgins was called to Saranac Lake by the death of his brother, Joseph, who had owned the original Post Office Pharmacy. He remained here and made Saranac Lake the family home. Mr. Higgins established the Trudeau Bus Lines on Nov. 16, 1920, and operated it between the Sanatorium and the Village until his death in 1940…

TAKE NOTICE, that the undersigned, owner and operator of the so-called Trudeau Bus, running Village of Saranac Lake to Trudeau Sanatorium, has duly filed with the N. Y. State Public Service Commission a new tariff schedule increasing the Adult Fare on said Bus from Fifteen (15) Cents to Twenty (20) Cents, effective on January 12th, 1953.