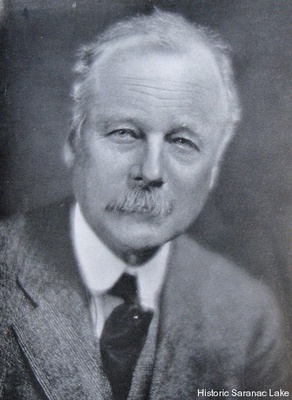 Dr. Walter Belknap James was the second president of Trudeau Sanatorium, after the death of its founder, Dr. Edward Livingston Trudeau. He had a summer camp on Upper St. Regis Lake. In 1916 he founded the Edward Livingston Trudeau Foundation with Dr. Edward R. Baldwin. He had a successful practice in New York City, and taught at Columbia University Medical School. He may have had tuberculosis himself. 1 He left an estate valued at two million dollars.

Dr. Walter B. James of New York, who last year purchased the Schlessinger camp on the Upper St. Regis Lake, also prefers to sleep in a tent or an open camp. One of the features of the James camp last Summer was a tent of the shape and size of an Indian tepee, and here Dr. James slept at the side of a camp fire throughout the Summer.

Dr. James's neighbors on the east are Col. Jacob C. R. Peabody of Boston and Whitelaw Reid, while on the west is the camp of E. H. Coates. Last Autumn Dr. James began to rebuild the cabins formerly occupied by Mr. Schlessinger. Dr. James designed the buildings himself, and they are distinctive among the confusion of shingle-sided buildings which are in course of construction in the mountains this year. The main building of the new James camp is a story and a half in height.  The construction is of logs to a height of about eight feet above the ground, and thence to the roof the exterior is thatched with cedar bark shingles.   In the interior, in the doors and in the exterior stairway of the Winter cabin, Dr. James has used silvered old boards, which are nothing less than the unpainted, rough, unfinished, weather-beaten boards commonly seen in farm buildings and fences in remote localities. To secure these boards it was necessary to tear down several barns belonging to farmers and to replace the farm buildings with comparatively modern structures, it will readily be appreciated that the cost of these silvered old boards is considerably more than that of the finest white pine, but they were desired above all other timber to give the cabin the appearance of a rustic building- constructed some time ago.

In the construction of the Winter cabin, these are made from 2 by 6 inch beams rounded in a lathe and ship-lapped. The Interior is finished in six-inch V timber, calked with oakum and conveying the appearance of the primitive hewed log. There is another Winter cabin with a tent combined, five tent platforms in a row with dressing rooms attached, pumping Station, boathouses, servants' quarters, &c.

1. An obituary stated "He was at the apogee of his career and not far beyond fifty when the symptoms of the disease to which he finally yielded first showed themselves." The disease is never named; it was common for tuberculosis to go unnamed in this way, perhaps a hold-over from a time when it was considered a shameful disease. Bulletin of New York Academy of Medicine

…The principal musical event of the season was on Monday evening in the hotel parlors when Mr. Carmine Fabrizio, violinist, who has one of the hotel cottages this season, gave a recital at which a large sum was realized in aid of Trudeau sanatorium at Saranac Lake. Dr. Walter B. James, president of the sanatorium; Mrs. James, Mrs. Whitelaw Reid, Mr. and Mrs. George S. Brewster and others of the St. Regis campers interested in the institution were among those in the audience…