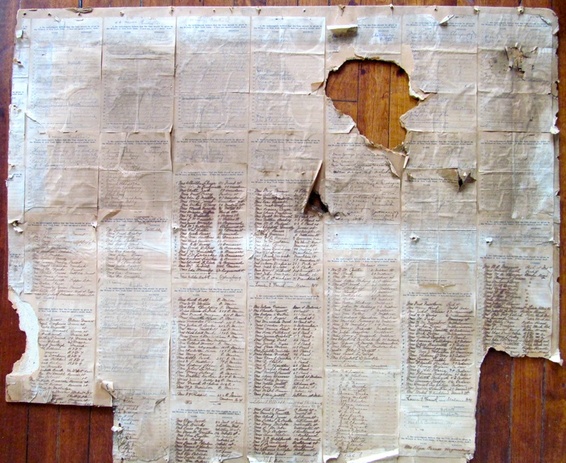 Display board of women's suffrage petitions dated 1917, found in the attic of 11 Park Place. Photograph courtesy of Gary and Wini Martin. The panel was later donated to the New York State Museum.The Women's Suffrage movement, advocating extending the vote to women, gained ground slowly through the early 1800s until the 1848 Seneca Falls Convention. This was followed two years later by the National Women's Rights Convention in Worcester, Massachusetts, the first of an annual series of meetings, four of which were held in New York between 1856 and 1860. A major effort was made during the 1867 New York Constitutional Convention, though it proved unsuccessful. New York finally passed women's suffrage in 1917, two years before the 19th Amendment to the U.S. Constitution was passed by the Senate; the Amendment was ratified by the states on August 18, 1920.

Women's suffrage was closely allied with the Prohibition movement.

This week the Saranac Lake News, which comes out on Washington's birthday (Thursday) will be a special suffrage edition edited and arranged solely by the woman's suffrage organization of this county. The edition will be 7,500 copies and be circulated generally throughout this county.

The reports of superintendents of the more important departments will follow, and there will be an address by Mrs. Hubert, of Saranac Lake, county organizer of the Suffrage party, on "The Responsibility of New York Women Today."

Both the Republican and Democratic County Committees at their meeting on Sept. 29th went on record with an endorsement of equal suffrage. This step followed a sort of surprise, party tendered both committees, when a delegation of Franklin County suffragists came to the court house, and asked permission to present their cause to the committeemen. This permission was at once granted, and a most courteous reception was accorded to the delegation. At the Democratic meeting, immediately after hearing the suffrage argument, which was presented by Mrs. W. H. Hubert, of Saranac Lake, as spokesman, a resolution endorsing the suffrage campaign was introduced by Leslie M. Saunders, of St. Regis Falls, seconded by B. A. Bell of Constable, and unanimously carried. Later in the afternoon the suffragists were present at the Republican meeting, and again asked the members of that committee to take favorable action, in accordance with the suffrage plank in their party platform. A resolution similar to that passed by the Democratic meeting was offered, being introduced by Ex-Senator Marshall, who said that he had had the privilege of voting for suffrage in the senate and was glad to present such a resolution. His motion was seconded and carried unanimously by a rising vote, several members of the committee, including the new chairman, F. S. Steenberge, speaking in favor of the suffrage movement. The resolution was worded as follows:—

WHEREAS, women are already enfranchised in eleven states and have partial suffrage in many more, and

WHEREAS, a million women in New York state, including more than six thousand from Franklin county have gone on record as desiring the right to the ballot, and

WHEREAS, the platform of the Republican party includes a plank favoring equal suffrage, be It therefore

RESOLVED, that we, the Republican County Committee of Franklin county do hereby record our endorsement of the suffrage plank in our party platform and of the the campaign for woman suffrage in this state and county."

The suffrage delegation declared themselves well pleased with the action of the committeemen. They said they had thought favorable action would surely be taken by any body of New York state men who believed in real democracy and who were told of the large number of women who ask for the ballot.