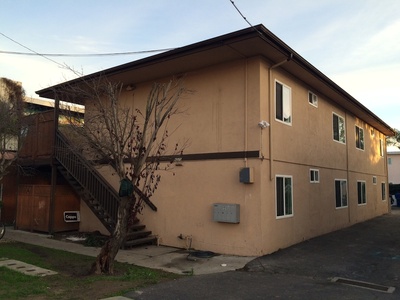 The building in January 2015, by Britta Gustafson (CC BY-SA)

The apartment building at 6575 Trigo Road used to be the Working Alternatives Halfway House for men recently released from prison. Working Alternatives was open for more than 20 years and closed in February 2005, despite protests from students in support of the halfway house.

From the Daily Nexus:

A.S. Pledges to Help Halfway House, February 24, 2005: "Joaquin told the council that the halfway house gets funding from the federal prison budget, which the Bush administration is cutting. The halfway house provides job opportunities to people formerly incarcerated for nonviolent crimes. Joaquin said the halfway house is important because it helps to provide a community of support for former prison inmates and people convicted of minor offenses."

Save the Halfway House (opinion), February 24, 2005: "What can be done to break the chain of this inhumane and oppressive system? The Working Alternatives Halfway House in Isla Vista is one of the few resources and programs available for released prisoners to make the transition from prisons to communities...We as students and community members need to take a stand against these budget cuts and show our support for the positive efforts of the halfway houses that help reduce the recidivism rate."

Ralliers Protest Closure of I.V. Halfway House, February 28, 2005: "The Federal Bureau of Prisons gave the home’s 11 residents a 10-day advanced notice of the closure, which was ordered due to recent budget cuts and the house’s insufficient use of its 25- to 32-person capacity. Word of the prison bureau’s decision sparked an outcry of support from a number of UCSB students and faculty involved in the house’s ClearWater Project. For the past 10 years, the nonprofit ClearWater Project connected local students with residents of the halfway house to break down stereotypes and teach life skills."

Prison Bureau Denies Part in Halfway House Closure, March 1, 2005: "Traci Billingsley, chief public information officer for the Federal Bureau of Prisons, said the decision to close the program was made not by the bureau, but by Working Alternatives, the company that oversees the halfway house...“To a certain extent, the Bureau of Prisons is right — it is ultimately up to Working Alternatives whether or not to close,” Trujillo said. “But the reason that Working Alternatives is closing is because the federal bureau isn’t sending them enough prisoners for them to make money.”"

IV is often called a student neighborhood, but it's more complex than that - it's always had more than just students. IV has a greater percentage of students now than it used to have, and some people think that this contributes to IV's problems. UCSB is interested in encouraging more adults to live in and near IV, such as working on faculty and staff housing along the Eucalyptus Curtain. The halfway house was a different type of housing diversity that apparently contributed positively to IV and is now gone, and knowing that it was here might help inspire more flexible thinking about what IV has been and can be.

It's also interesting to learn what previous rounds of students were working on and caring about in IV, to better understand what Associated Students has worked on and what it can (and can't) do.