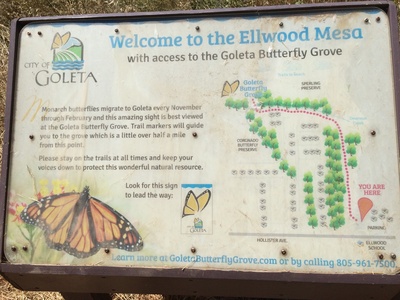 The Goleta Butterfly Grove (otherwise called Ellwood Main Butterfly Grove) is located within the Sperling Preserve on the Ellwood Mesa, and is filled with monarch butterflies during their migration season each November through February. The Grove is currently owned by the City of Goleta, and generally stays open year round from sunrise to sunset. The grove has a rich history that shows the complex interaction between humans, the environment and the majestic monarch butterfly.

The human-environment interactions at the Goleta Butterfly Grove have affected this natural space and species, and have uncovered the beliefs that underly the attraction of so many people to this butterfly preserve. What draws many people to the preserve is the main attraction of this natural setting-- the monarch butterfly. According to Regina Cutter Edwards from Gardens with Wings, typically, the butterfly symbolizes "endurance, change, hope and life." It is the perception surrounding the butterfly that attracts so many tourists and this grove and have made it a prominent tourist attraction. 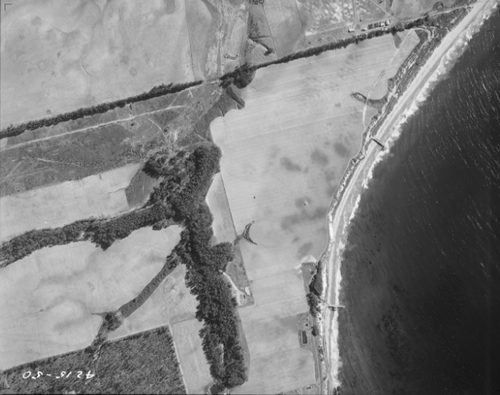 1936We researched the initial development of Ellwood Mesa and its transformation into a preserve and tourist attraction through available online sources . We were interested in the initial draw of the monarchs to the area from planting of eucalyptus trees by the initial developer of the Mesa--Ellwood Cooper. Ellwood Cooper, an innovative entrepreneur and horticulturist, brought the Australian import of the eucalyptus tree to Santa Barbara in 1872. He hoped these trees  would become a “staple source of lumber,” as they thrive in the Santa Barbara Climate climate. In addition to eucalyptus trees, Cooper also grew “olives, walnuts, grapes, almonds, oranges, lemons and Japanese persimmons,” which created a “favorable setting” for the yearly visitation of monarch to the Ellwood area (Independent, Michael Redmon).

To the right and below are aerial images of the Ellwood Mesa from the UCSB Aerial Imagery Research Service . The images are from the years 1936 and 1944. As seen, there is already the establishment of a large strip of eucalyptus trees in the Ellwood Mesa, which would serve as the primary driver of migration of monarchs to the area.

Although the eucalyptus tree thrives in this environment and brings many different types of bird species as well as the monarch butterfly, it has also taken the place of many native plant species. In fact, according to a member of the UCSB Greenhouse, the eucalyptus trees on the University’s campus are being removed within the next two years. 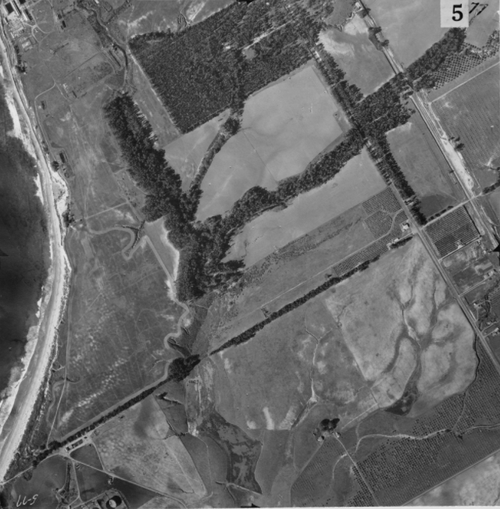 Field study of adaptation for tourism

A main field study in this project was visiting the mesa to document the manipulation of in the natural environment in order to make the preserve fitting for large groups of tourists. From a personal visit to the grove, it is apparent that many measures have been put in place to make this environment both a viable, tourist-friendly attraction—and to subsequently protect this environment from tourists.

The parking lot that that is noted on the Goleta Grove Website is a 0.5 mile walk through clearly established trials to the main grove area. At the beginning of the trail close to the parking lot, there is a map of the trails: 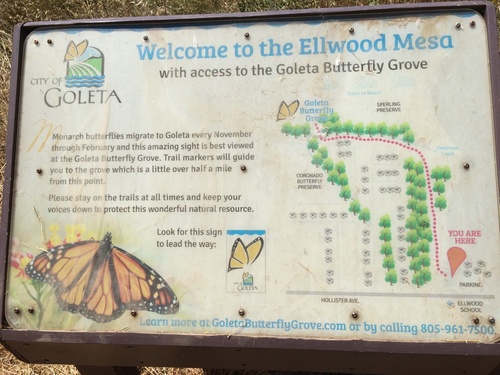 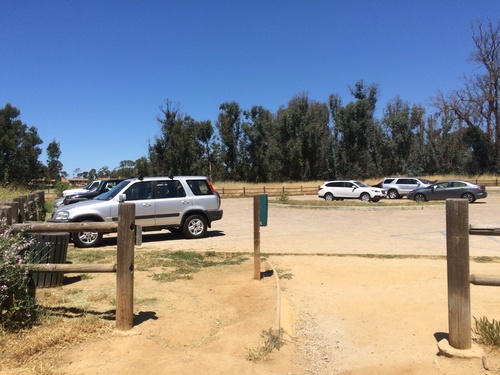 Throughout the 0.5 walk, there are many small signs with a butterfly images to ensure tourists are taking the correct path: 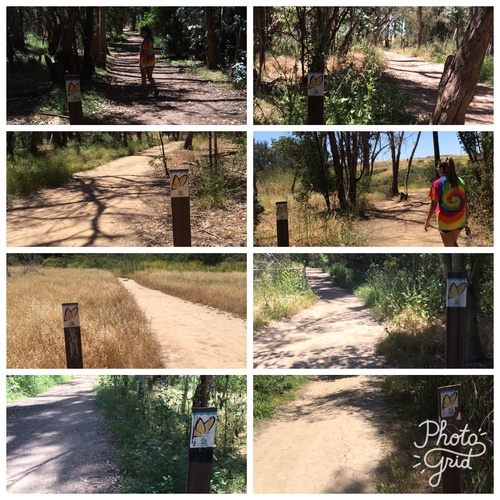 The creation of clearly marked trails is an important factor that that makes this space and easily accessible for tourists, but also attempts to control and limit their interaction with the environment.   We noticed that many measures have been put in place to protect the space from negative human interaction. After following the clearly marked trails to the main grove area, there are many ropes that block off the main eucalyptus tree area where the butterflies congregate: 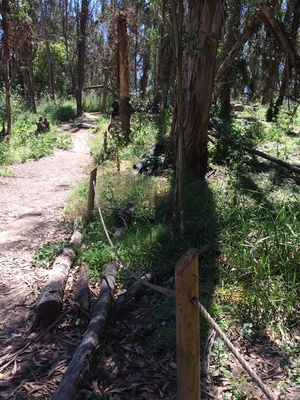 This is a more explicit attempt by preserve management to limit the interaction of tourists with the natural environment. There are further seating areas made from old tree stumps that line the main grove area, an effort to make this natural environment more comfortable. 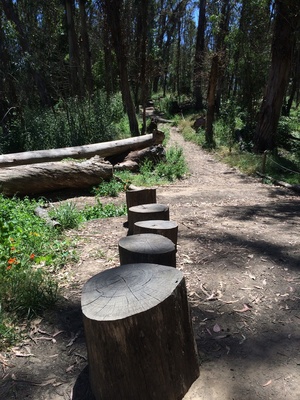 In addition to physical enforcements such as ropes and fences that are put in place throughout the preserve, there are many of signs throughout the main part of the grove that list rules and regulations. These signs attempt to appeal to the morality of tourists by using phrases such such as “To protect these trees and the butterflies” and “Please respect the habitat and wildlife to help preserve its natural beauty” before listing the actions that are prohibited: 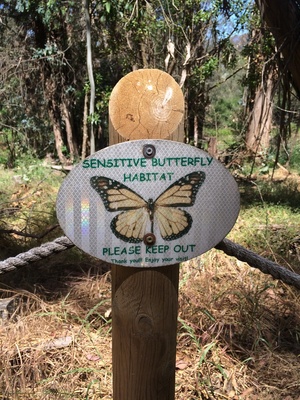 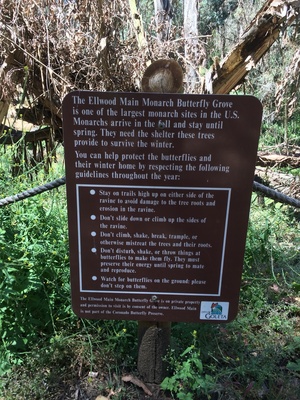 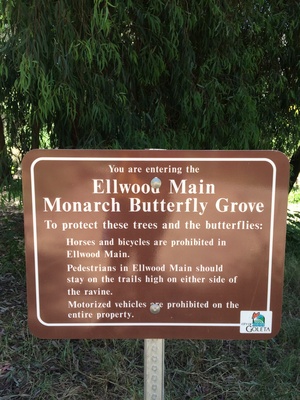 The manipulation of the natural environment is a key aspect of the grove’s development into a popular tourist attraction.  While the eucalyptus trees planted by Ellwood Cooper were not initially planted with the intention of drawing butterflies—and in response, flocks of tourists—this natural development created the necessity of safeguards against tourists.

The Goleta Butterfly Grove’s transformation into a modern local tourist attraction is apparent through online sources. First and foremost is the City of Goleta’s Monarch Butterfly Website. On this website, there is a separate tab labeled “Visit the Grove,” which is for the sole purpose of attracting tourists and giving them information. For example, the website recommends to visit during the peak months of November through February, during the time of monarch migration. The website makes it simple for tourists to navigate the grove by giving direct coordinates for the parking lot area, directions by car and by bus, and a printable map option of the path leading down to the Grove.

In addition to the City of Goleta page, the Goleta Monarch Grove is greatly publicized on another website that serves the sole purpose of tourism—Trip Advisor.  On this platform, visitors are able to share their experiences at the grove and give a general “rating” of their experience.  Trip Advisor has a total of 59 Reviews earning an average of 4.5/5 for the Goleta Butterfly Grove.  Most of the reviews received a positive review, with 82% of reviews receiving either “very good” or “excellent.” What becomes a common theme when reading the positive reviews is that they tend to be more eco-centric and appreciative of “pristine” forms of the natural environment surrounding the grove, in addition to appreciating the majesty of the monarch butterfly. For example, one of the 5/5 reviewers remarks that this is a “truly magical place” and “natural sanctuary.” Many of them further were appreciative of the surrounding natural environment even when it was lacking butterflies.

While most of the reviews were positive and appreciative of the beautiful area,  there were still 18 % that gave it an “average,” “poor” or “terrible” rating. Most of these rating were lowered because of the complaint that there were lack of or no butterflies. While many of these reviews were understanding of the external natural factors that caused there to be a lack of butterflies (such as storm conditions or the fact that they did not go during peak migration season), many of the reviewers subsequently lowered the rating of their experience. One of the reviewers further gave a one star rating because of the accessibility of the grove—stating that the “dirt trials” make it inaccessible by baby stroller.

What is most interesting about the Trip Advisor page is that the City of Goleta takes time to respond to these reviews—mostly the negative reviews. For example, to one review that gave a 1 star rating for the inaccessibility of the grove (or having to walk along dirt trails), the City of Goleta responded that these groves are “right where nature placed them.” In addition, they responded  a reviewer in January 2017 who complained about lack of butterflies during their visit with the following:

Below is an image of historic butterfly population over the last two decades. While counts plummeted to 3,000 in 2009, this is not nearly as drastic as recent counts: 123 butterflies. This astounding drop has been a driving factor in the drafting of a butterfly habitat management plan. 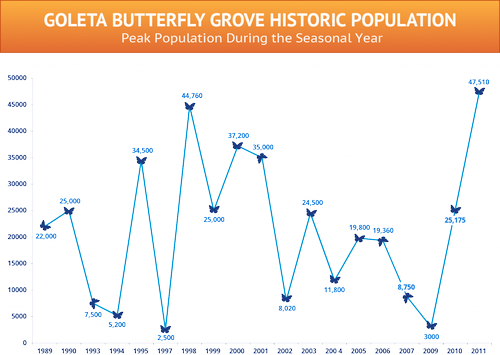 There are already the beginnings of a plan for habitat management through the “City of Goleta Ellwood Mesa/Sperling Preserve Open Space Draft Monarch Butterfly Habitat Management Plan.” While there is limited information on this plan, the basic foundations can be found at https://www.goletabutterflygrove.com/resources/. According to the City of Goleta website, this plan was created by biologists with the intention to "maintain and improve the Ellwood Mesa monarch butterfly habitat so it can continue to support migrating monarchs." To gain more insight on the habitat plan of the butterfly grove, the next step would be to contact a Monarch Specialist through the city of Goleta. We tried doing so but unfortunately the specialist was out of the office during our attempted times of contact.