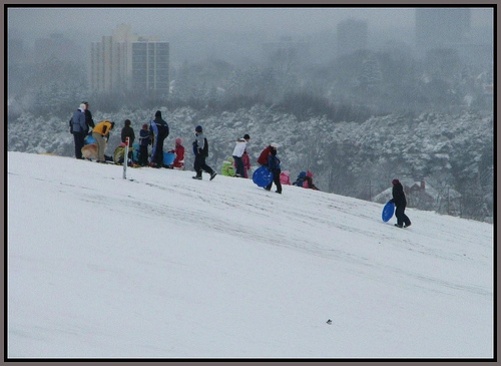 A landfill site in south-west Kitchener was closed in the 1970s and new homes were built in what is now known as Country Hills, Laurentian Hills and Glencairn. The site was covered with topsoil and planted with grass but trouble brewed below the surface. High levels of methane gas were detected in nearby homes and some were evacuated for several years. Pipes were built to release the gas and a methane fueled flame burned for several years at the site.

Gradually the area has naturalized and the big hill became known as the best place for sledding withing the city limits. Over the past couple of years, a number of improvements have been made to McLennan Park with grading of the sledding hill, the addition of lighting, benches, a parking lot, and the establishment of a fenced dog park. Mountain bike trails are currently under construction. A number of geocaches can be found in the park as well. Much of the park is still in a natural state with frogs found in vernal ponds and nesting Kildeer and Red-winged Blackbirds in the fields.  City bike trails are found along the hydro right of way.