Pasadena is a city in the Los Angeles country, home to 142,647 as of 2017. Pasadena became home to many when it was established in 1886 as it joined the Los Angeles County which was established just 30 years before. The small town became a place for people to travel to and stay in as a destination spot for tourists. The new developments that appeared after the Great Depression housed many soon for it to be the eighth largest city in California. Present day Pasadena is just as lively as it is home to many as well as filled with great shopping, entertainment, restaurants, and events housed at the iconic Rose Bowl Stadium,

Tournament of Roses Parade and Rose Bowl, Pasadena is more than just a football town. Its extravagant City Hall boasts a beautiful Baroque dome, a courtyard garden and relaxing fountain. On South Orange Boulevard, known as Millionaires' Row, there are landmarked mansions to rival the most opulent homes of Beverly Hills. That chattering in the air is probably the local population of naturalized Red-crowned Amazon parrots. (Taken from: Trip Advisor http://www.tripadvisor.com/). The Tournament of Roses home is on this street considered Millionares' Row. This is where junior women from schools all around Pasadena go to try out for the Rose Court. The Royal Rose Court is the group of women that change once a year and are considered the face of the elite of young women in Pasadena. In a four round try out competition, thousands go under the scope of judges and are weeded out to find those that are the most driven, well rounded, women of Pasadena. These girls will go to many events throughout the year of their term including the Rose Parade which premiers on live television on New Years Day.

Pasadena is a city filled with incredible shopping areas such as Old Town Pasadena, amazing restaurants, and home of the iconic Rose Bowl. The Rose Bowl is where University of California Los Angeles (UCLA) plays football throughout the year. It is also home to many football games, soccer games, golf tournaments, concerts, and music festivals. The Rose Bowl opened in October 1922, the stadium is recognized as a National Historic Landmark and a California Historic Civil Engineering landmark that can hold up to 90,888 people.  This historical landmark is huge and centers Pasadena, creating its town around it. This gigantic landmark is not the only part of the area that houses events. The Rose Bowl hosts a local flea market once a month that brings thousands to the stadium's parking lot. The Rose Bowl is also home to a swim team, golf country club, baseball field, and a park that surround the parameter. Performers such as Beyonce, Eminem, Coldplay, Kenny Chesney, The Rolling Stones, and many others have made the stadium sell out during their performances. The famous stadium has also hosted the Super Bowl five times throughout its standing history with its first time being in 1977 for Super Bowl XI with four more times following. The Rose Bowl even hosted the Olympics in soccer in 1984 attracting 101,799 in attendance which held the record for the most attending Olympic soccer match up until 2014.

Along with these landmarks, Pasadena is also home to incredible shopping, living areas, country clubs, and restaurants. During the years 1900-1929 Old Town Pasadena or as it was known back then as Downtown Pasadena became a hub for shopping and restaurant, where many people went to enjoy the streets of Pasadena as it was home to some of the bigger buildings in the areas including a huge furniture store. The decline of what was known as Downtown happened between 1940-1975 as the towns around the areas came out with more lively areas, the town decided to strip the buildings and spruce them up. Developments were made at that time then giving Downtown its life back. During this time, Old Town became a little more modernized bringing in  bigger department stores that drew more attention to the town making Old Town Pasadena one of the most popular shopping and entertainment areas. Today, you will find more modern stores on the Colorado Blvd strip, such as Urban Outfitters, Madewell, Forever 21 and more. Although the shopping has become much more chain oriented, the restaurants in the area are to die for. Places like 1810, a hole in the wall empanada restaurant stands in the center of the shopping strip and is consistently filled with happy customers. The Colorado Blvd Strip is home to some of the most incredible little restaurants and stores that have kept people coming back for many years.

Pasadena is also home to many schools as well as families living among the town. With an estimated median house or condo value in 2016: $708,20, Pasadena is know for their more upscale living and schooling options. Pasadena High School,  Maranatha Christian High School, La Salle High School and many others are known for being incredible high schools for students preparing for college or just life after school. Many families choose to live in the area for the great schools near by. Whether a family is searching for public or private schools, Pasadena has a large range that will give the average family a great plethora of options. These schools are known for creating a space for students to feel welcomed, cared about, heard, and taught to the fullest extent.

The Colorado State Bridge is another gorgeous landmark in Pasadena California. The Colorado State Bridge was designed by the firm Waddell &  Harrington in the year 1912.  The bridge spans 1,486 feet connecting cities Eagle Rock, Pasadena, and Monrovia all together connected to a freeway. The bridge is recognized by the distinctive arches, light fixtures, and railings. In the early parts of the twentieth century, the bridge was nicknamed "Suicide Bridge" due to the outrageous number of people who committed suicide by jumping off this landmark. Since then, Pasadena has tried to keep that nickname away and bring back the name Colorado State Bridge instead, although many still call it Suicide Bridge. This landmark runs through Colorado Boulevard and is a major part of the Pasadena history. 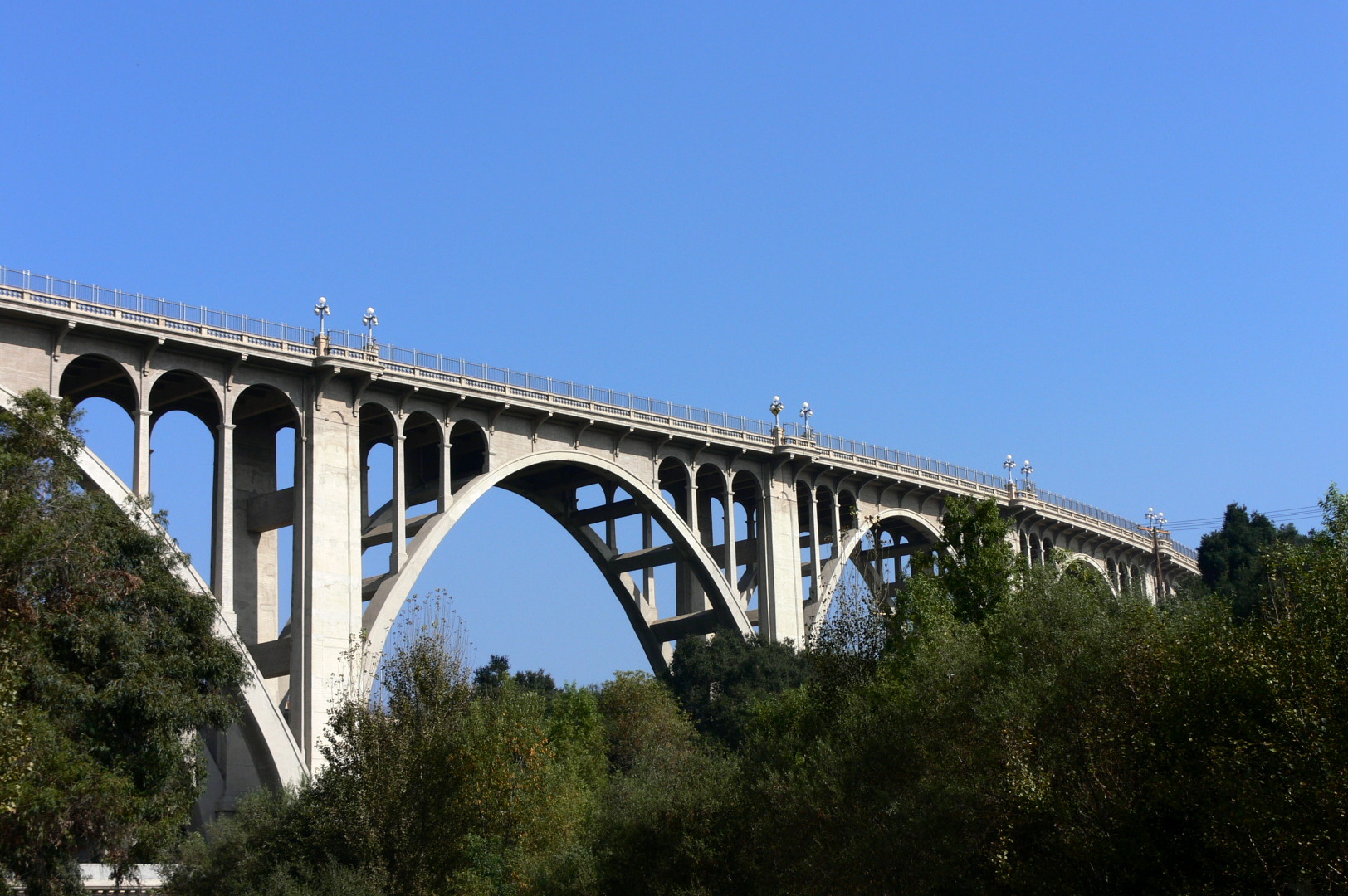 Pasadena is overall one of the more historic cities in Los Angeles County. Filled with families, homes, schools, and entertainment, Pasadena is definitely a tourist's place to see. Between Old Town, The Rose Bowl, The Colorado State Bridge and so much more, Pasadena has a lot for people to do and see during their stay in California. This city is filled with rich history that dates back hundreds of years, and is still a popping place to be.