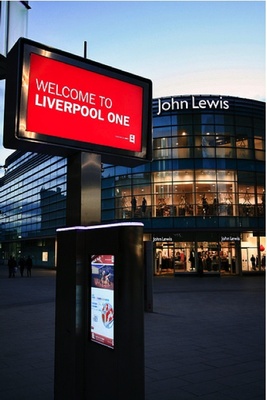 Building began in 2005 on Liverpool One, and is ongoing to complete the Liverpool Hilton hotel and the Ceaser Pelli-designed One park west apartments complex overlooking the waterfront. The retail element of the development came into operation in the year 2008, Liverpool's year as the Capital of Culture. There is a 14-screen cinema, a leisure level complete with bars and restaurants, as well as a completely re-designed Chavase Park. Liverpool One has its own supermarket on Renshaw Street. The scale is enormous spanning 6 areas, and is one of Europe's largest retail and leisure destinations in a city centre. The complex is owned by the Chester based Duke of Westminster's company Grosvenor, which also owns the whole of London's Mayfair and Belgravia.

The complex acts as a corridor between the Liverpool Albert Dock waterfront and the city centre.

Liverpool One on wikipedia