Liverpool - The Home of The Skyscraper

Without prior technical innovations the building of the many new and large structures of the late 19th century/early 20th century would not have been possible.

From the latter part of the 18th century a series of innovations and inventions reshaped architecture.

Iron was used in industrial buildings throughout Britain, however these were primarily for fireproofing reasons with the odd columns being structural. This advanced to more extensive structural systems with partial frames being introduced. Many innovations saw their birth or early development in Liverpool partly due to:

These two points merged to advance building innovation. The key building blocks of the modern multi-floor building were developed primarily in the city of Liverpool. Key developments are listed below.

Iron to Hold Up buildings 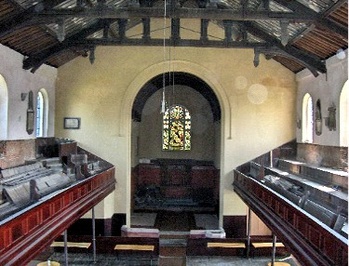 This began with the idea of using thin iron columns to support encircling galleries in churches in order to minimise obstruction to view the preacher. The earliest examples in Liverpool were St Anne's church in Liverpool, built in 1772 but now demolished, and the now unused church of St James' in 1774. The thin iron columns supporting the balcony can be seen and the clear spacious interior created. 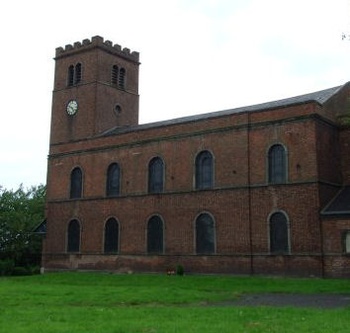 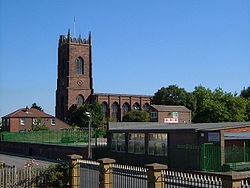 The first building using prefabricated iron on a large scale for building frames and windows with a view to re-using the moulds for subsequent buildings to lower costs and give large uninterrupted interior spaces. Many of the casts were reused for St. Michael's church. 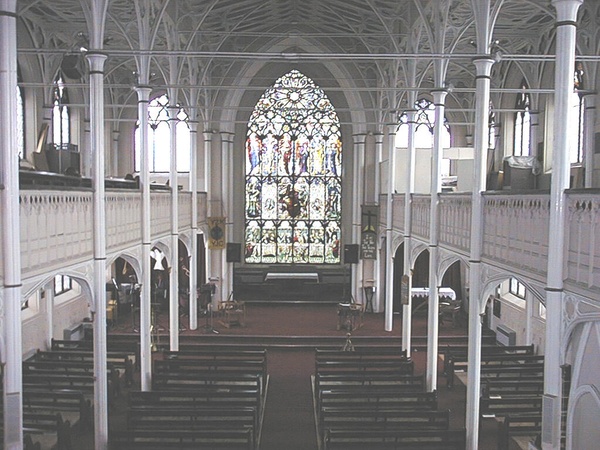 The Magnificent Ornamented Structural Ironwork Inside The Iron Church 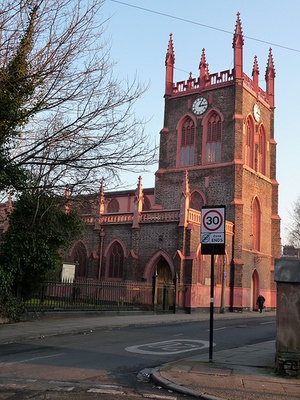 St Michael's Church, Liverpool, 1815, also by Rickman, has a complete iron frame using many of the iron casting moulds of St. George's Church. The building was intended as a prototype for churches which could be easily erected on difficult terrain. A part of the design accommodated easily added extensions, as was the case with St. Michaels. The church was built on an iron plinth with slate covering. Even the parapets and pinnacles are cast iron with the pink colours a coating of rustproofing paint. 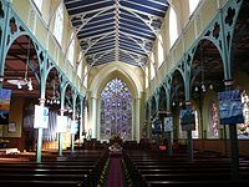 The interior of St. Micheal's Church

These experimental structures were promoted by the Mersey Forge, who made cannons and other ironwork mainly associated with shipbuilding. In 1845 the Forge constructed an unnamed 'huge gun', 13 feet long, for the American frigate 'Princetown'.

From these small beginnings sprang the great iron and steel structures of the 19th century. Cast iron was also used, as in Rickman's churches, in prefabricated sections. This had advantages in that buildings using iron and prefabrication were fireproof, quick to erect, had the potential to be mass produced and, unlike brick and stone buildings that took about a year to dry out, they were dry and ready for use on completion. A number of iron kit churches were made and exported to various parts of the British Empire. 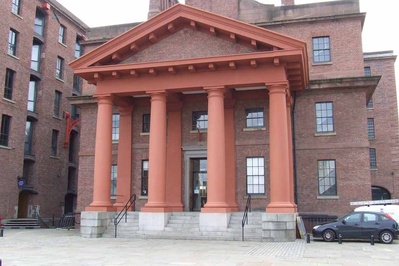 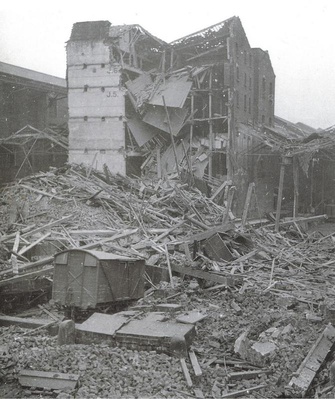 German air bombing of Park Lane Goods Station 1940 German Luftwaffe bombings in 1940 exposed the iron frame of this warehouse at the Park Lane goods rail depot. Opened in 1830, the depot was at Liverpool's south end docks and accessed by the 1.26 mile long Wapping Tunnel.

The iron frame of this early, eight floor, 1800s Liverpool warehouse can clearly be seen. Greater floor area was gained in using this type of construction, which added fireproofing qualities. The light frame enabled greater height, economy of construction and further economy in ultilisation of the land footprint, although this warehouse was located over rail tracks. 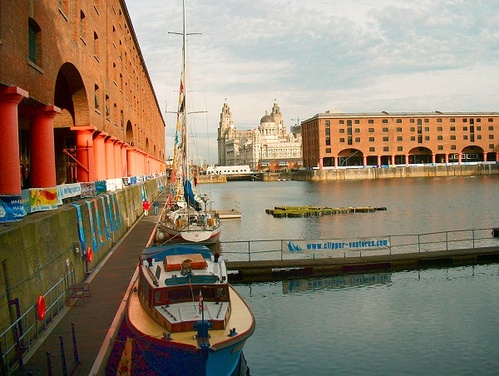 Fireproof construction was developed in the factories of the North West of England and in the great warehouses of Liverpool. The 1845 Albert Dock Warehouses are a fine example being built entirely of stone, brick and hollow cast-iron columns. There are no flammable materials in the whole complex. 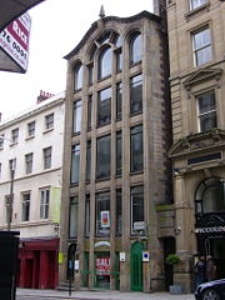 In the past, the walls of a building had been a part of its structural strength. The idea of cladding a building with a thin, light, waterproof membrane had been thought out by Peter Ellis, a local Liverpool architect, and first used in his design for the Oriel Chambers office building in 1864. This has an iron frame clad with thin panels of glass and decorative stone. The result is one of the first examples of modern architecture and clearly the mother of present day glass curtain wall office buildings.

To the left, 16 Cook Street, Liverpool, 1866. The world's second steel framed glass curtain walled building. Designed by Peter Ellis. The style of this small, good looking building was over 40 years ahead of its time, reflecting the Nouveau Art designs of Paris immediately prior to world war one. The whole front is an expanse of glass contrasting sharply with adjacent buildings. 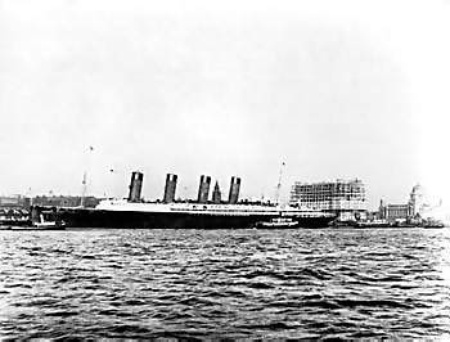 Liver Buildings Under Construction with Lusitania Alongside

To build the skyscrapers needed to house the great offices required by commerce, it was necessary to devise a frame of steel or reinforced concrete. New York and Chicago built taller buildings after the elevator was invented. Many examples were built with some of the initial buildings swaying disturbingly entailing quick frame re-designs. 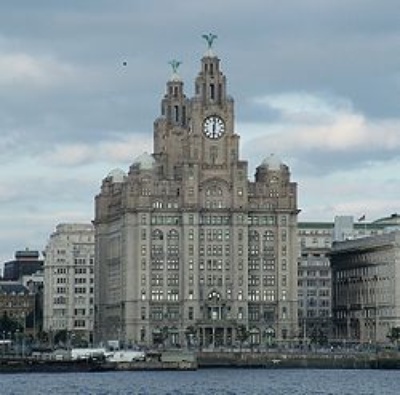 The Liver Buildings Europe's First Skyscraper The first really large office building in the world of reinforced concrete frame was the pioneering Royal Liver Buildings at Liverpool. The building's structure used the the French ferro-concrete Hennebique system. The Liver Buildings was the first large scale implementation of the system.

The 210mm thick floor slabs, now commonly used and known as 'hollow tile', was invented for the Liver Buildings. The construction method was taken up whole or part by many of the early to mid 20th century New York and Chicago Towers. 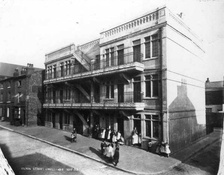 Finally, the idea of omitting a frame and using a series of prefabricated reinforced concrete panels for support was introduced. Buildings like a pack of cards. This was pioneered by John Brodie, Liverpool's City Engineer from 1898 to 1925, who invented and used such a system on the apartments at Eldon Street, Liverpool, in 1905 and on the tram stables at Walton in 1906. The idea was not taken up extensively in Britain, however was adopted all over the world, particularly in Eastern Europe. 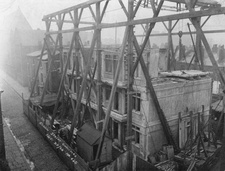 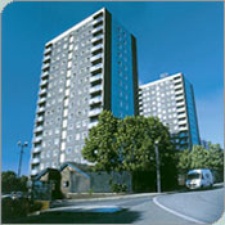 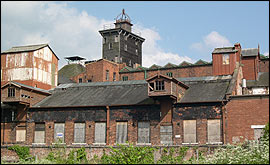 This is a partial iron framed building with some outer walls being structural. The building extended the use of iron in industrial buildings which had been used in lesser forms for fireproofing and structural use, mainly around Derbyshire. The building was used until 1987, and was in danger of demolition, however English Heritage have saved the building.

The first building with a true rigid iron frame, with no load bearing masonry, at the naval dockyard. This building was a four storey, three bay frame 64 metres by 41 metres by 16 metres high. 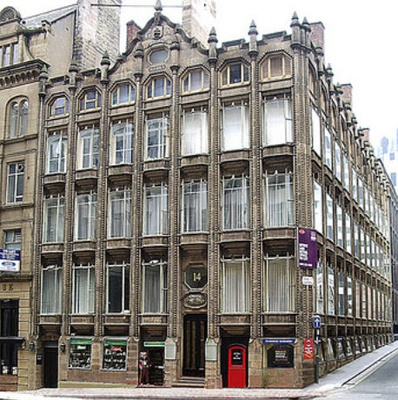 Other Buildings Worthy of Mention

Reliance Building: John Root, the architect who designed many of the early Chicago skyscrapers was studying in Liverpool at the time Oriel Chambers was constructed. He designed the Reliance Building in Chicago in 1895, reputed to be the first skyscraper. Buildings were restricted to five floors in height as most people would not walk up more than this height. The invention of the elevator and piped heating systems, unavailable to Peter Ellis in Liverpool in 1864, meant Root could build upwards in a steel frame.

The outer cladding of the Reliance Building was structural in stiffening the frame, unlike the cladding of Oriel Chambers, which was merely to keep the weather out and allow light to project deep into the building. Even the oriel windows echo Oriel Chambers in Liverpool. 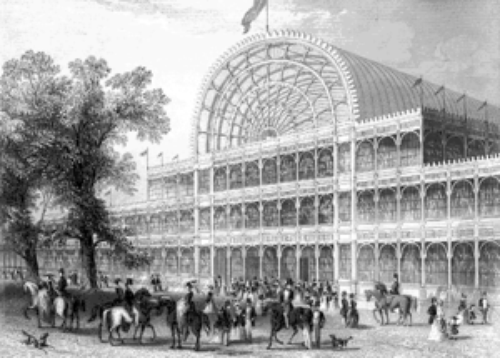 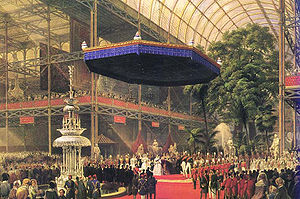 The Crystal Palace: The remarkable massive Crystal Palace of 1851, in London, was iron framed and glass walls, but not multi-floor, so not so influential in promoting the multi-floor skyscraper. However it pointed the way forwards. It was unbolted and moved from Hyde Park in central London to a park in South London, being destroyed by fire in 1939: