Where is Googleplex Located? 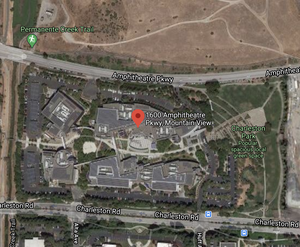 Right in the heart of the Silicon Valley lays a townAdd a caption
called Mountain View. Mountain View was originally used a farmland as the rural suburbs of San Francisco. Around the 1960’s a tech boom brought life to the valley. Companies such as IBM began to dominate all of the local tech business. Through many decades of ups and downs, from the .COM boom, to the beginning of high tech and social networks Mountain View stayed the hub for many tech business. Mountain View is 10 minutes from world famous Stanford University, 40 minutes by car to San Francisco and 20 minutes by car to San Jose. Mountain View is also situation right on the Bay and is surrounded by pristine marshland to the east, and the bustling suburbs to the North South and West.Add a caption

On September 4, 1998 Google was formed as a company in Menlo Park, CA. In early 2003 the company moved to 1600 Amphitheater Parkway to establish its new company headquarters. Quickly after moving to Mountain View, google began to expand rapidly, developing and buying buildings all across the city and neighborhood. Due to the size and growth of the company. Googles headquarters grew from one main building to dozens of surrounding buildings. These collections of buildings quickly formed a new tech neighborhood. And the term Googleplex was born.

How many people work at the Googleplex?

As of late 2019, 2,800 hundred full time employees are employed across the Googleplex. With thousands more who work remotely but at required to come to the Plex in order to complete work. Not only does Google have thousands of employees, but they also have hundreds of sub-contractors that help run these massive campuses. Some of these sub-contractors are in charge of cafeteria of food services, technology and IT support, logistics surrounding events and facility matinees as well as many other sub-critical jobs. While not of Googles direct payroll, often times these contractors are considered part of the Google team.

How Big is the google Plex?

As of 2019, the Googleplex is about 80 acres in size and has approximately 6.5 million square feet of offices with many more currently under construction. The Plex is also home to a massive private bus service that connects to all parts of the San Francisco Bay Area and allows employee to travel to and from work with comfortable wifi enabled buses. The site is also home to hotels, multiple parks, and a scattering of gym and other recreational places across the Plex. While most recreational places are open only to google employees and guests, Google does work with local sports leagues to allows children to use the fields during non-business hours and the weekends.

How it connects to modern Bay Area history

Being home to one of the largest companies in the Silicon Valley, Google has become part of the city and the community. While not everyone loves having a massive complex next to them, google has done many things to help the community. Hundreds of small programs across the complex and area have helped the city and neighborhoods around google. They created sports fields for youth sports to use and enjoy, they have programs to build sustainable buildings and other green projects. One of the more notable attractions is its feral cat program, the company tracks and captures feral cats to be neutered and spayed and then released back into its the neighborhoods. 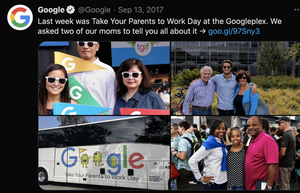 Being a resident who grew up around the Googleplex, one of the most distinguishable features that google has imprinted onto the local community is the Google Bike. One of the main ways to get around the Googleplex is by riding a google bike down the bike paths to the next set of buildings. The Bikes are very simple in design and are painted bright colors to represent the colors of Google. Google has about 1,200 bikes strewn across its vast Googleplex, as is free to use for any google employees. However, one common problem that Google has created is the number of Bikes Stolen from google every day. All across the surrounding cities you will find these bright colored bikes just laying around in all corners. Due to the cheap nature of the bike, an estimated 200 bikes are stolen from the Googleplex each month. While at times and eyesore, many neighborhood kids, homeless and others can be see riding these cheap bikes all across the region. One common joke is that the job of first day interns at google is to go around collecting the bikes. While most bikes have GPS trackers on them, the sheer number of bikes makes recovery very difficult. On rare occasion you will see interns / contractors drive around the city collecting all the bikes. While at times it does create conflict with the local neighbors, most of the time the bikes are seen in a positive light. 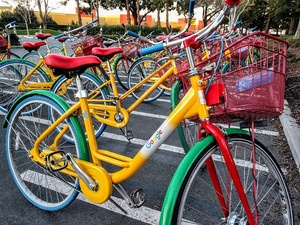 One of the main issues surrounding Google is the creation of Traffic for the area. Only 2 freeway exits are designated for google, and the number of cars in the morning and afternoon can often times overwhelming local traffic capacity, causing hours of delays. Google has spent money Widening streets as well as updating traffic signals in the area to help with the flow of traffic. They also use their own private bus services to help limit the amount of cars their employees are taking.

Another issue that Google faces is the steep climb of property around the Googleplex. Before Google began to systematically expand and develop part of their Googleplex many other companies in the offices were forced out in order to make room for google.

The Fall of the Googleplex.

In March 2020, when the Covid-19 Pandemic hit the world by surprise. Most of Google went remote. At first, this was designed to be temporary, but in all likelihood due to the shifting ideas surrounding work-from-home, many buildings in the Googleplex are no longer going to be filled. With most working being able to be done remotely, it’s unlikely the Googleplex is going to grow any more. While no solid plans have been announced by google, it is likely to see the Googleplex shrink over time. While 1600 Amphitheater Parkway is here to stay, many of the surrounding buildings will likely be sold off or rented off.