12th Street/ City Center BART Station is a three level subway station location in Downtown Oakland, CA. It is the busiest BART station in Oakland and the rest of the East Bay. The concourse mezzanine is on the first level downstairs, an island platform and two main tracks for Northbound trains (bound for Richmond and Antioch) are on the second level downstairs, and a side platform with one track for Southbound trains (bound for Warm Springs/South Fremont, Millbrae, and San Francisco International Airport) are on the third level downstairs. The station has red brickwork, contrasting with the blue of nearby 19th Street/Oakland station.

The station has eight public entrances: two at 11th Street, three at 13th Street, and two at 14th Street, plus one from the belowground plaza of Oakland City Center near 13th Street. AC Transit lines connect on the street above the station at 14th and Franklin (6, 18, , Broadway and 12th and Broadway and 11th stations. 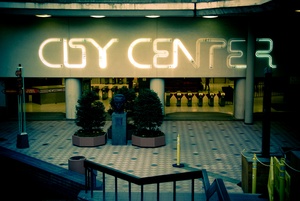