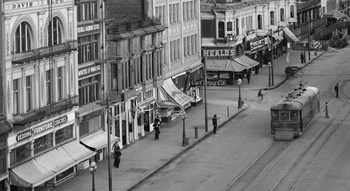 Isabella "Bella" Belmont (aka Mrs. Belmont) was a "medium", listed variously as a palmist or clairvoyant. A c.1912 sign proclaims her as "The Most Powerful Medium."

In 1909, she was in business with Vinnie MacLean at 1117 Washington. After that she was is business on her own, mostly at 1612 San Pablo Ave. next to the Acme Grill.

Little information has been found about Mrs. Belmont, but the 1910 census lists her as a palmist, says she was born about 1868 in New York, divorced, and had two children, Etta Belmont and Bert G. Belmont. Not to be confused with the more famous Mrs. Belmont (aka the former Mrs. William K. Vanderbilt.)