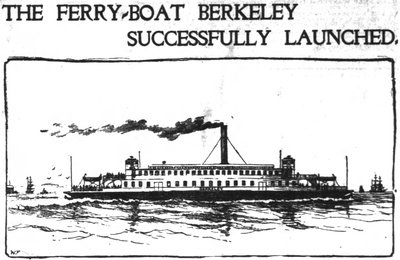 The ferryboat Berkeley was a ferry that ran between Oakland and San Francisco from its launch in 1898 until 1958 when Southern Pacific discontinued ferry service. At the time of its launch, the Berkeley was the first propeller-driven ferry on the west coast, and the largest commuter ferryboat in the U.S., capable of carrying 1,700 passengers.

After it was taken out of service, it was sold to the Golden Gate Fishing Company to be used as a whaling processing facility. But before being converted for that use, she was purchased by ferryboat enthusiast and businessman Bill Conover. Conover had Berkeley docked in Sausalito and converted her into a gift shop called "Trade Fair". In 1973, she was sold to the Maritime Museum of San Diego. The Berkeley now serves as the main building of the museum.