Beverley David Thorne (July 9, 1924 – December 6, 2017) was an architect, noted for his modernist designs, and use of heavy steel framework. His most famous work is probably Heartwood House (aka Brubeck West).

Thorne was born July 9, 1924, to William P. Thorne and Vivian E. Shepherd (Thorne). The family lived in Piedmont, but Beverley has a younger sister named Oakland, Oakland Linda Thorne, as well as another sister Vivian Durace Thorne who died in 1985. He served as a fighter pilot during WWII. 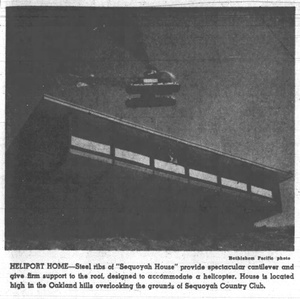 Beverley studied architecture at UC Berkeley after the war, graduating in 1950. 1 After designing the home for Dave Brubeck and inclusion in Arts & Architecture magazine for 'Case Study House No. 26' catapulted him to fame, Thorne intentionally dropped out of sight in the mid-1960s. He switched from using the name David back to his given name Beverley, and eventually moved to Hawai'i.