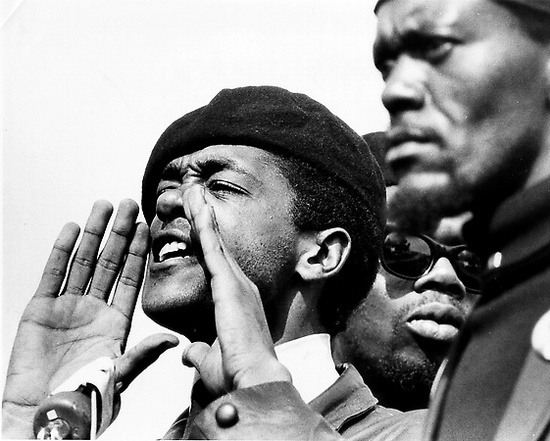 From PBS.org A Huey P. Newton Story "Bobby Seale was the co-founder of the Black Panther Party for Self Defense along with Huey P. Newton. After serving for three years in the US Air Force, he was court-martialed and received a bad conduct discharge. He soon entered Merritt College in Oakland, California where he met Newton. It was in October 1966 when Seale and Newton created the BPP and wrote the Ten-Point Program.

Over the course of his life, Seale was arrested multiple times, the most major charges being his involvement at the 1968 Democratic National Convention. In 1969, Seale was indicted in Chicago for conspiracy to incite riots. The court refused to allow him to have his choice of lawyer. When Seale continually rose to speak out for his constitutional rights, specifically to choose his own counsel, the judge ordered him bound and gagged. He was convicted of 16 counts of contempt and sentenced to four years in prison, which was later reversed. In 1970-71 he and a codefendant were tried for the 1969 murder of a Black Panther suspected of being a police informer. The six-month-long trial ended with a hung jury.

Bobby Seale continues today speaking of his involvement with the Black Panthers and is an advocate for civil rights and social change."

Excerpt from the Oakland Tribune "The North Oakland bungalow where young revolutionaries founded the Black Panther Party in the late 1960s has been remodeled into a trendy showpiece.

Panther co-founder Bobby Seale lived there with his parents when he and other early Panthers patrolled neighborhoods carrying the weapons they kept at the home now advertised as a $400,000 light-filled house with maple, stainless steel and quartz features.

The family home was a central meeting place for the Black Panthers, with Seale drafting notes on the Panthers' 10-Point Program on the dining room table.  He and the coalescing Panthers debated philosophy, law and how to protect black youths from Oakland and Berkeley police as his mom cooked in the kitchen and his dad tinkered outside.

Bobby Seale and Huey Newton met as classmates at nearby Merritt College and co-founded the Black Panther Party in October 1966."