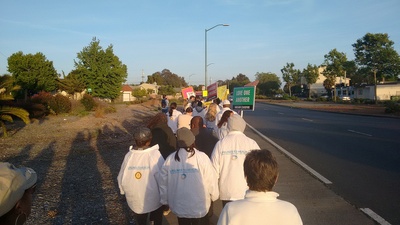 Ceasefire walk from St. Benedict's, 2016
CC SA- BY Our Oakland

There are a number of versions of violence-prevention programs which have been called "Ceasefire." Perhaps the best-known follows the pattern described in David Kennedy's book Don't Shoot.

The fundamental principle of Ceasefire programs is quite straightforward: changing the behavior of violent social groups and individuals using first, positive reinforcement and second, the threat of certain punishment through prosecution and the likelihood of a prison sentence. Violent groups and individuals are identified and adequate evidence gathered of criminal acts sufficient to support prosecution. A network of support groups and individuals is organized and coordinated. The support can come from governmental and nongovernmental sources. A "call-in" session is organized in which the violence-prone meet with police and others who offer support. What is offered is an opportunity to change behavior, with government and community help or the threat of prosecution and a certain jail sentence.

Ceasefire programs require a lot of resources and careful management and coordination of diverse activities. Where there is not adequate management and coordination, as has invariably been the case in Oakland, Ceasefire will fail, according to David Kennedy who has visited here in recent years. Oakland's ongoing problems with implementing Ceasefire are in accord with a general level of incompetence in government regarding leadership, planning and management of complex projects. For example an absolutely necessary full-time professional Ceasefire program coordinator position was funded by the City Council in 2011. As of the Fall of 2013 the City Administrator has failed to fill this position.

Question: Has this position been filled?

Ceasefire was implemented in Oakland the first time, unsuccessfully in 2004.

Ceasefire was again implemented in 2010 and failed, according to OPD Captain Ersie Joyner, because the positive support promised to the violent offenders was not delivered.

Ceasefire was implemented in Oakland again in 2013:
The following actions are being taken:

To Whom It May Concern,

This letter is to inform individuals who are at risk of being involved in gun violence about the enforcement priorities of the Oakland Police Department (OPD) and our local, state, and federal partners. This letter has been distributed today at locations associated with street groups whose members are suspected in a large number of shootings and homicides in Oakland.

All who reside in Oakland deserve to live in peace and safety. For far too long, too many in this city have been shot or killed. Along with our community partners, we view these victims as members of our community who we want to see alive and free. All of us who value the City of Oakland believe that stopping gun violence must be the top priority of law enforcement.

OPD’s central strategy to reduce gun violence is Operation Ceasefire. Under Ceasefire, partners use data and intelligence to identify those at highest risk for violence. We then use a multi-pronged strategy to engage those at highest risk and help them make different choices about violence. For those who reject the offer to help, the strategy reserves special enforcement attention from OPD, the Alameda County District Attorney, the Unites States Attorney, Alameda County Probation, California Department of Corrections and Rehabilitation, the California Highway Patrol, Alameda County Sheriff’s Office, FBI, DEA, ATF, U.S. Marshalls Service, Homeland Security, IRS, Secret Service, and other partners. We are all focused on individuals and groups who shoot and kill in the streets of Oakland; this is how we will be working from now on.

You may have friends, associates, and family members who need to know that engaging in gun violence will bring this kind of special attention. If you care about them, you will share this message.

Howard A. Jordan
Chief of Police

From a concerned citizen

Oakland’s version of Boston’s Ceasefire is a sad replica and doesn’t follow any of the activities Boston activated to stop the juvenile homicide rate for two and half years. Where are the youth workers, not those old people wearing white coats with cameras following them around? Where are the summer jobs for the youth? Why aren’t there youth workers in the middle schools and high schools? Where are the sports leagues for the rival gangs? Where are the collaborations with clergy, city hall, youth centers and CBO’s? Where does $20,000,000 dollars go a year? Did you know that Boston didn’t even have a budget for Ceasefire! Why does the number of homicides continue to climb? What happened to the $300,000 for Bratton? Was that cost just for 3 months of work? Oakland’s version of Ceasefire is a joke! Sorry Oakland residents, you need to get your money back or scrap Oakland’s version of Ceasefire, it clearly doesn’t work!

Boston Police never sent out letters to people about Ceasefire. We set up meetings through the Probation Department, who ever was on Probation for guns, gang activity were mandated to show up to a meeting. If Oakland knew anything about Boston's Ceasefire, then they would [k]now that!