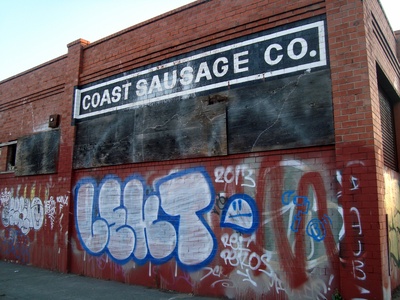 Coast Sausage Company is a now-closed sausage company whose building still stands abandoned at the corner of Adeline St. and 28th St. in West Oakland. It opened in [???] and was closed in 1993 by the USDA. Following a federal investigation, the USDA discovered that the company was using beef unfit for human consumption. Apparently 100,000 pounds of sausage were seized and a recall was issued, although no one was found to be harmed by consuming tainted beef. Most of the Company's products were sold to the military. 1

Apparently, this building (and/or possibly the site across the street) have been approved for a development project. It's currently unclear whether the buildings/land on the eastern side of Adeline (across from the building that says "Coast Sausage Co") was originally part of the Company or not [source].

The owners of the sausage factory and a vacant lot next door are required to pay the city $65,000 and clean up the property as of a July 1, 2017 settlement agreement with the City Attorney’s Neighborhood Law Corps unit. The current owners purchased the properties in 2002. Over the years, city public works employees issued 167 work orders to clean it up. Under the settlement, the owners must develop a commercial property on the site, remove all trash and secure the building. 2